Everybody be cool this is a real robbery, stopped Pulp Fiction style

You probably noticed that this website has a few advertising banners for bmfwallets.com, a partner site that sells licensed Pulp Fiction wallets embroidered with the now cult “Bad Mother Fucker” on it. Pull out this wallet in front of friends, and you are sure to impress. Shame on whoever does not recognize the reference – and sit them down for a way overdue Tarantino movie night.

Whether you have recently watched the director-approved new transfer on the Pulp Fiction BluRay (also part of the Tarantino XX box set) or you remember the scene word by word anyhow, you will recall how Jules (Sam Jackson‘s greatest role) practically stops a diner robbery by Fonzie-talking the gangster out of it, and subsequently letting them go with the cash from the register, leaving Vincent (John Travolta) baffled, but hey, he’s in his transitional phase. He goes on to drink his coffee, and the two then take off. What spooked Pumpkin and Honey Bunny, the robber couple? Upon collecting patrons’ wallets, they come across Jules, who’s wallet says BAD MOTHER FUCKER on it, and because that is what he is, he quickly has his gun up Ringo’s (how he calls Pumpkin) nose and gives him the Ezekiel speech.

So what if you were caught in a real life robbery? How cool would you react? Probably not as cool as this guy, who had an actual Bad Mother Fucker Wallet with him, let his adrenaline turn him into Jules Winnfield and he stopped the robbery. Surreal? Maybe, but according to news reports, a guy in Arizona stopped a coffee shop stick up exactly Pulp Fiction style.

“It was really lucky that I had my wallet with me that said ‘bad motherfucker’ on it. The robbers came around demanding everybody’s wallet and I just held it up, you know like how Samuel L. Jackson did in ‘Pulp Fiction. After I said the comment about my wallet, the robbers started freaking out. So then, in my best tough black guy voice I said to them: ‘Normally, both your asses would be dead as fucking friend chicken, but you happen to pull this shit while I’m in a transitional period so I don’t wanna kill you. I wanna help you.’ “

“I knew my vast knowledge of ‘Pulp Fiction’ would pay off for me one day,” says Paul Horner, a guy Fonzie cool. If it only were a real story :) 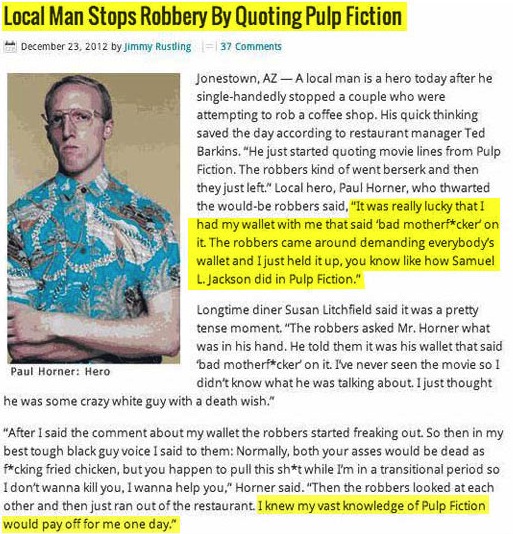