Tarantino is the most studied director in the UK

Film students have long looked up to the ultimate film student for inspiration: Quentin Tarantino. Few other filmmakers have such a pronounced knowledge of film and embody it in their work to such extent. It motivates  young talents, his work opens everyone’s eyes to a variety of cinema, and his films are entertaining and informative case studies for any scholar. Small wonder then, that a recent survey by PureMovies.co.uk (a film site with an academic focus) found out that Quentin is in fact the most studied director – at least in the UK. Over the last five years, no other director has been references in academic papers than Quentin, beating Christopher Nolan, who came second (personally I am not a big fan of his movies). Pulp Fiction made number four on the list of most cited films in the study carried out by Uxbridge College. It’s Head of Film Studies, Dr. Garth Twa, said that Tarantino is “visceral, accessible, and students new to film studies have an immediate handle on visual pleasure.” He goes on to reaffirm what I said above, that he is like “a gateway to appreciate everything from French New Wave to genre studies to gender representation in film.” (Source)

Unfortunately I am unable to unearth the actual study at this time, also PureMovies does not seem to carry the information after it relaunched a few days ago. We welcome feedback in the comments section. 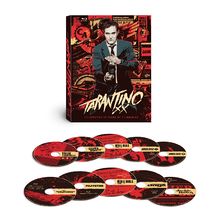