Which Version of The Hateful Eight to Watch and How

A. The Roadshow version

In general, the roadshow version boasts an overture and intermission, it’s the “event” version of the movie, and it’s also slightly longer, at a total of 3h 7min (187min total, in the full 70mm version), with 3 min 48 sec overture, including 12 min intermission. 10 reels of 70mm film.

This is the premium version of seeing The Hateful Eight, which was shot in Ultra Panavision (allowing for 2.76:1 aspect ratio) and meant to be seen by Quentin in all its 70mm glory, shipped in 10 containers of 70mm film reel. Only about 100 theaters in the US, and a handful of theaters around the globe will actually show it this way. It’s the version as Quentin Tarantino would love you to see it. Refer to tickets.hatefuleight.com, the unofficial listings at in70mm.com and our screenings list to check where it is playing. The official website has full list of theaters in the US and Canada that show the 70mm roadshow version. Internationally, it’s trickier, but there is a way.

The 70mm copy has been transferred into a digital version (4K we presume) and most theaters projecting the 70mm might have the digital equivalent “on file” as a backup (some theaters have actually had to fall back to it during press/test screenings when old 70mm projection equipment failed them). As far as we know however, all theaters officially screening the 70mm roadshow version will project the 70mm reels. Check with your theater, where it says roadshow version, it might not necessarily be 70mm. It clicks at 2 hours 55 minutes (175 mins) without the intermission.

So far, the only place we know of is the New Beverly Cinema, Quentin’s own, that will screen his personal 35mm copy of the roadshow version there this January. There is obviously a process that goes from turning a 70mm copy into a 35mm copy, and it’s not quite the same experience, but hey, you’ll be seeing movie magic. Click here to visit the New Bev’s website to check screenings. 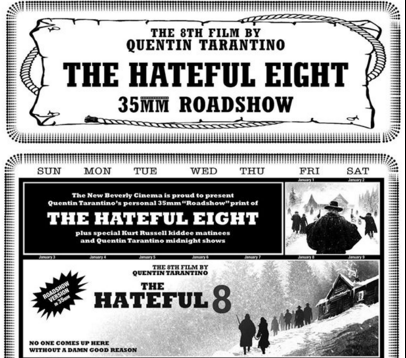 B. The Wide Release version

Clocking at 2 hours 47 minutes (167 mins, DCP or 35mm), this regular version of The Hateful Eight is how most people on this planet will actually be seeing it, without overture or intermission, and with a minimally shorter running time. The scope is a bit less majestic, as it’s no longer the 70mm ultra scope widescreen cinema magic, but a reduced, regular “cinemascope” aspect ratio projection. Please not that it’s not an “inferior” or “censored” version, it’s just not the “event” version of the limited roadshow release, it’s the regular theatrical release.

Again, if you want to experience the magic of cinema, you want moving images flickering through the air, find a theater that will actually show a 35mm version of it. We can’t really tell you where that is, chances are that there aren’t so many 35mm reels of this floating around, as most theaters around the globe have switched to DCP, which is a lot cheaper especially for smaller theaters, and offers the same quality however many times the movie has been played.

Quentin doesn’t want to watch “TV in public”, so if you follow his spirit, DCP is always the less cinematic choice, but in fact this is the most widely available version on the planet. Most people in this world will see this version, in this format. So if this is the only way for you to see it, don’t feel excluded, you’re actually the majority. If the theater doesn’t say 70mm or roadshow, or anything else, you’re safe to assume you’ll be seeing a digital projection.