The eighth film by Quentin Tarantino, an intense and intimate contained western showcases Samuel L. Jackson in his most monumental career performance in a career of monumental performances.  Sam Jackson once again shows us he is the quintessential Tarantinoian actor if there ever was one. Here he plays Major Marquis Warren, a former U.S. Calvary soldier, now a servant of the court, a bounty hunter, stuck in the middle of the icy white Wyoming mountains as he finds himself in the path of a serendipitous stage coach trying to outrun a blizzard.

Warren hitches a ride with John “The Hangman” Ruth, (Kurt Russell) in his his second western of the year (Bone Tomahawk, 2015), his third in 22 years (Tombstone, 1993.) While Russell’s performance in Bone Tomahawk suggests he may be our generation’s John Wayne, his performance in The Hateful Eight confirms it. Ruth, also a bounty hunter, despite his moniker, rides the stage chain linked to Daisy Domergue (pronounced DAHMER-GOO) an outlaw with a $10,000 bounty on her head. Dead or alive, John Ruth brings his bounties in alive, that’s his thing. Warren brings ‘em in dead, that’s his.

The story’s set in postbellum America, either “six or eight or twelve years after the Civil War” but based on a throwaway line by Maj. Warren referring to then actress Lillie Langtry, it’s no earlier than 1874 but probably closer to around 1881. Still, the Civil War reigns prevalent in most everyone’s backstory and nearly gets restaged in Minnie’s Haberdashery, a stagecoach stopover on the road to Red Rock, where everyone’s headed.

With even fewer locations than Reservoir Dogs, this is Tarantino’s most confined film yet it’s also his most expanse. While showcasing the grand vistas of the Rocky Mountains, the plot is mostly set in two central locales, on the Butterfield Overland Stage Company’s stagecoach and Minnie’s Haberdashery. In his most literary film, Tarantino once again takes a novelistic approach in the plotting as the story unfolds in chapters and the main characters are given such rich backstories, a great American novel can be written about each one of them.

After Maj. Warren comes aboard Ruth’s stage, they pick up another stranger on the road, Chris Mannix of the infamous Mannix Marauders, cast brilliantly with Walton Goggins. The coincidence of John Ruth picking up two strangers on his way to Red Rock is hilariously addressed and dismissed as well as the fact that there are two bounty hunters working independent of each other riding the same stage. Tarantino exercises an amazing degree of storytelling prowess in that not only is it okay for the story absorb a coincidence or two but the story is richer for it.

Photographed by Robert Richardson in Ultra Panavision 70 (only the 11th film to do so, Star Wars: Rogue One will be the 12th), this movie has an extremely wide aspect ratio of 2.76:1.  It’s actually photographed on 65mm film then blown up to and projected off of 70mm.  Decades old lenses had to be refurbished, some of the same ones that had actually photographed 1959’s Ben-Hur.  New 2000 foot film magazines had to be designed to house the 11-12 minutes of 65mm film.  Ultra Panavision 70’s standard mags held up to 500 foot rolls previously.  One of the camera’s limitations that Tarantino wasn’t expecting was the inability to mount a zoom lens.  He wasn’t able to utilize a slow push in on this film due to the technological limitations however there are several brilliantly staged split diopter shots, where both the background in one half of the frame and foreground in the other half are in sharp focus.  This film might very well have the highest number of split diopter shots in all of Tarantino’s films and one in particular is so well staged, a hilarious but crucial cause and effect plot point occurs in the same shot, in the same take, in the background and simultaneously the foreground. Tarantino and Richardson use every cinematic trick they can.

Richardson photographs the expansive vistas well but also takes full advantage of the format in the intimately confined setting of Minnie’s. That set is so well designed, it photographs well in the epic format usually reserved for cinematic epics and travelogues. Here, Minnie’s Haberdashery is given that same love and as a result, we are given an extremely detailed setting that we can revisit over and over and pick out new details.  Maybe on 2nd or 3rd viewing we might notice some random prop that plays a key role later on. Richardson lights the night exteriors non-diegetically, beautiful and unnoticeable in the first viewing. The cabin, the outhouse and the stable are all backlit by light that does not exist in the story. There’s no sun and there’s no moon out, there are no lamps providing the light. Those few night exterior shots are a master class in how to light spaces when they should exist in complete darkness. Non-diegetic lighting, light that only the audience can see yet it still makes sense.

Tarantino’s films always carry a high level of rewatchabililty as does this film in particular. Once you get the story out of the way in the first viewing, let your eyes dart around the frame in subsequent viewings, notice the other characters in the frame that aren’t the subject, their performances take on new meaning with multiple viewings.  If you’re seeing it more than once, pay attention to the backgrounds when we’re supposed to be focusing on the foreground, and vice versa, especially one particular character in the cabin when we see him for the first time.

Tarantino and Fred Raskin’s editing allow for the performances to breath as we may stay on a character for a beat or two longer than conventional Hollywood filmmaking would accept, which creates a nice contradiction to the confined setting. As confined as the setting is, the establishing shots and other exteriors are wide open which nicely juxtapose with the cabin and its walls that keep closing in on our characters in this intense Civil War microcosm set in a crucible.

As he nears the end of his filmography, Tarantino continues to master the art of filmmaking like none other, delivering one exceptional film after another, merging story with art until they are one. The Hateful Eight’s characters’ battle of values are as epic as the film’s cinerama exteriors, its tension tighter than its claustrophobic setting. Like in Pulp Fiction, Tarantino juggles several themes here, one of which is paranoia which gets nicely complimented with Ennio Morricone’s nerve jangling score, his first western score since 1981’s “Occhio Alla Penna” (aka “Buddy Goes West.”)  Morricone’s score here evokes his score for The Untouchables, but quickly becomes it’s own thing, ingraining itself into the DNA of the picture. Morricone also scored John Carpenter’s The Thing which is very much The Hateful Eight’s ancestor, with its intensely claustrophobic paranoia set against a wintery setting.  Tarantino had even screened The Thing for the entire cast and used that film’s score as temp music for the promo reel that was shown at 2015’s Comic Con.  There’s some needle drop music as well, all non-diegetic and anachronistic such as The White Stripes’ “Apple Blossom,” Roy Orbison’s “There Won’t Be Many Coming Home” and David Hess’ “Now You’re All Alone” from Wes Craven’s “Last House On The Left”  yet those tracks compliment the story well, no matter how out of time they may be.

The themes of the films aren’t as anachronistic as they are relevant with both its own time and today. It’s not necessarily a social message movie but one can be taken away. Tarantino has always had something to say and the case is certainly true here if not more apparent. 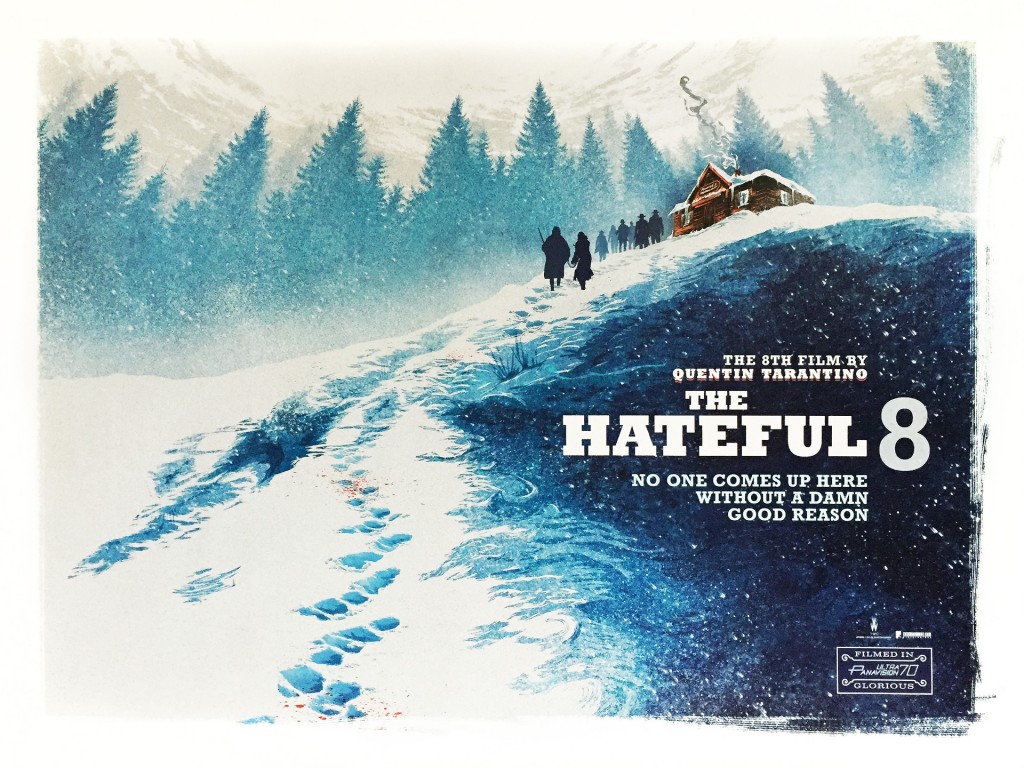 The Hateful Eight opens christmas day in the US beginning with a limited 70mm Roadshow release, followed by a wide release. Click here to watch the trailer. Click here to find out where it plays. If you’ve seen it, comment your reactions below. Click here to read a background article on the movie at Furious Cinema.