The Sound of the Spaghetti West: Ennio Morricone, Quentin Tarantino, and The Hateful Eight 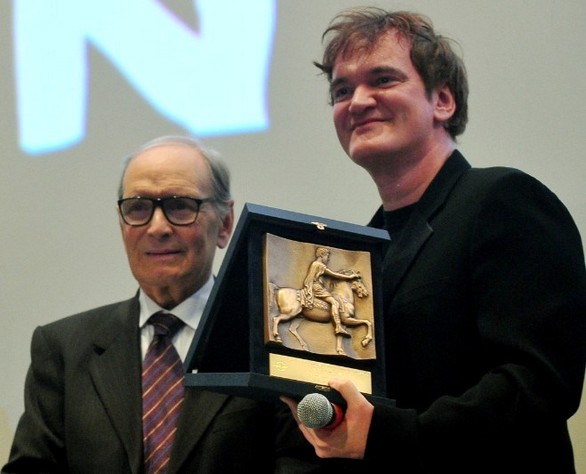 Gunshots, bells, whip cracks, whistles, chants and wordless voices, a mariachi trumpet, violently percussive acoustic guitars – such are the predominant sounds in Ennio Morricone’s soundtrack for Sergio Leone’s 1960s Dollars Trilogy. Each successive film in the trilogy is bigger, longer, and more ambitious in story, cinematography, and music. The Good, the Bad, and the Ugly (1966), the trilogy’s third film and the seminal work of the spaghetti western genre, best represents the stark contrast to the Old West that Hollywood had been romanticizing for decades. The music, too, was different – raw, dirty, and wild; less heroic yet still epic, grand, and other-worldly. 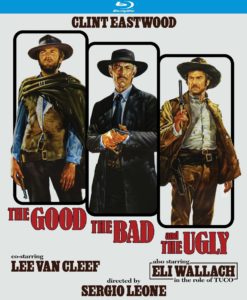 Italy’s fascination with the old American West during the sixties and seventies spawned hundreds of films that make up the spaghetti western oeuvre. Only a few dozen may be worth watching, but they’ve had a tremendous impact on present day film directors John Carpenter, Alex Cox, Robert Rodriguez, and Quentin Tarantino, among others. Sergio Leone is universally acknowledged as the most important and influential director of the genre, while Clint Eastwood, thanks to top billing in Leone’s trilogy, remains the face. And while his name may not be as well-known as Eastwood’s or Leone’s, Ennio Morricone, who wrote more than forty film scores for the genre, provided the sound of the spaghetti west.

Compare Morricone’s spaghetti western music to that of a typical American western, The Magnificent Seven (1960). A few minutes after pressing play, a listener might mistake Elmer Bernstein’s music for something written by the American composer Aaron Copland in the 1930s and 40s; in a symphony concert hall it would fit right in alongside Copland’s ballet suites Billy the Kid and Rodeo. It’s the stereotypical music of the cheesy, fun-loving Old West later affectionately mocked in faux-Westerns Blazing Saddles, City Slickers, and Back to the Future Part III.

Morricone is now pushing ninety, and in recent years his name and music have become more associated with writer-director superstar Quentin Tarantino. Tarantino’s encyclopedic knowledge of spaghetti westerns has been well-chronicled – of the many hundreds made, one gets the impression Tarantino has seen them all – and he has often cited The Good, the Bad, and the Ugly as his favorite movie. With his love for spaghetti westerns comes his love for Morricone’s music. In large part due to Tarantino’s championing, both the genre and Morricone have enjoyed a revival in popularity over the past decade-plus.

Tarantino’s filmography includes a six-year gap following his third film, Jackie Brown (1997). While his movies before the gap were set in southern California and were crime films through and through, his current post-gap era reflects a more flamboyant style of directing and a much larger vision, with his films set throughout the world and covering longer periods of time. Echoes of his favorite spaghetti westerns are littered throughout these later films. 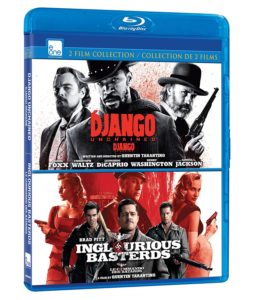 Bounty hunters? They are the main subjects of Leone’s For A Few Dollars More (1965) and Corbucci’s The Great Silence (1968).

A western set during the time of slavery? Westerns were typically set later in the nineteenth century, yes, but The Good, the Bad, and the Ugly was set during the Civil War.

The blurry shot of the bride walking in the desert with the sun setting behind her two-thirds of the way through Kill Bill Vol. 2 all but recreates the flashback sequences in Leone’s Once Upon a Time in the West (1968).

And finally, Tarantino’s latest, The Hateful Eight, takes place during a blizzard in Wyoming. Forty-seven years earlier, The Great Silence was set in a record-setting blizzard in Utah.

New music has been composed for Tarantino’s films in the past – the RZA and Robert Rodriguez notably composed for the Kill Bill soundtrack, while Morricone and John Legend each contributed new songs for Django Unchained – but The Hateful Eight is the first of Tarantino’s films to feature a new original score (albeit some of it has its origins in unused music he wrote for Carpenter’s The Thing). That Morricone signed on to write the music had to have been a dream come true for Tarantino and fans alike.

Including The Hateful Eight, Tarantino has used Morricone’s previously-composed music in each of his films since Kill Bill. Often, the music is front and center.

The music in this last Basterds example is another piece from The Big Gundown, “The Verdict”. Curiously, Morricone quotes the opening notes of Beethoven’s Fur Elise four times in the seventy-five second piece. Probably not coincidentally, Tarantino has a harpist perform Fur Elise on screen in Django Unchained, marking the second film in a row in which he has used the melody prominently. Morricone has on occasion “borrowed” other well-known melodies for his compositions, including Mendelssohn’s Wedding March in The Big Gundown, Mozart’s Eine Kleine Nachtmusik in Duck, You Sucker, and McCartney’s “Yesterday” in Once Upon a Time in America (1984).

While Ennio Morricone is most often associated with spaghetti westerns, his work in the genre represents only a fraction of his output; The Hateful Eight was his first western in forty years. IMDb.com lists over 500 composer credits for Morricone. Those aren’t all full scores, but it’s a lot considering that American favorite John Williams has only 147 credits listed, several dozen of which are for Star Wars movies, cartoons, TV shows, and video games. And Morricone can’t be charged with spreading himself thin, either, compared with Wolfgang Amadeus Mozart, whose 640-piece catalogue was composed during a lifetime half the length of Morricone’s.

After the age of the spaghetti western petered out, Morricone continued composing primarily for European films before enjoying mainstream success in the United States following his critically acclaimed scores for Once Upon a Time in America and The Mission (1986). The latter was nominated for an Oscar but lost controversially to Herbie Hancock’s score for Round Midnight, which consisted largely of previously-written music. Still, fat commissions followed throughout the 1980s, including Frantic, Roman Polanski’s first film after his exile; The Untouchables, another Oscar-nominated film score and the first of three collaborations with director Brian de Palma; and Cinema Paradiso, his first of many collaborations with Giuseppe Tornatore.

In 2007, Ennio Morricone received an Academy Honorary Award to recognize his lifetime achievements. Before The Hateful Eight, however, he had otherwise been nominated for an Academy Award five times without winning. Many consider his score for Once Upon a Time in America his best, but the American distributor famously forgot to submit the score for Oscar consideration, so that it wasn’t even eligible for a nomination. But with a new and high-profile original score, what a tremendous relief to so many of us that, as of February of 2016, this great composer is officially an Oscar-winner.

Joshua Britton’s fiction and non-fiction have appeared in Cobalt Review, Typehouse Literary, Tethered By Letters, Bodega Magazine, Spank the Carp, and The Trombone Journal. With degrees in music from Florida State University and Roberts Wesleyan College, Joshua currently lives in Evansville, IN, where he is a freelance trombonist and writer.