LOS ANGELES, CA- APRIL 10, 2014 – In honor of legendary actor, filmmaker and humanitarian Jerry Lewis footprinting ceremony at the Chinese Theatre, as part of the 2014 TCM Classic Film Festival Tribute, Quentin Tarantino is hosting a public four-film screening at the New Beverly Cinema on Saturday, April 12. This event will be free to the public.

Prints of “At War With the Army,” “Hollywood or Bust,” “Don’t Give Up the Ship,” and “Boeing, Boeing,” from Tarantino’s personal collection, will be presented on 35mm and are open to the public. The screenings are part of a larger celebration taking place honoring Jerry Lewis’ career.

“Jerry is a Hollywood treasure,” said Tarantino. “It’s a privilege to host a film tribute at the New Beverly and share my prints of his amazing work with the public.” The New Beverly Cinema is a passion project of Tarantino’s. After the original owner died in 2007, he purchased the building and saved the property from redevelopment. 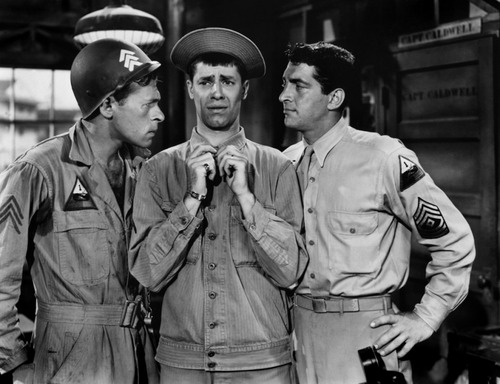 Speaking of classic films, the SWDB is holding a small fundraiser. Stop by and help out!