Tarantino and Rodriguez Reunite for Grindhouse 2

It was a great April Fool’s joke everyone, sorry for tricking you like this. We made the front page of Reddit, and over 200.000 people read this story. So in a way, one of the best pranks in a while. If we’d post news on Tarantino projects, we do it right. Definitely follow us on Facebook, Twitter and Google Plus to stay up to date on the latest from Tarantino’s world. Thanks for reading the Tarantino Archives!

Six years after they brought the double feature Death Proof and Planet Terror to US movie theaters, spawning a grindhouse revival and even an off-shoot of Machete sequels, the two directors are back with more. Quentin Tarantino and Robert Rodriguez (who is currently finishing Machete 2 and shooting Sin City: A Dame to Kill For), are reported to have met recently to discuss a sequel to 2007’s Grindhouse. Reportedly, Tarantino’s part will be titled “Cowgirls in Sweden“, a homage to 70s European sexploitation movies, and in fact based on a fake trailer idea he wanted to make for the first Grindhouse instalment. Rodriguez’ contribution will be a modified version of Machete 3 (aka Machete Kills Again) which will conclude the trilogy helmed by veteran actor Danny Trejo. For the latest updates and more news on Tarantino you should definitely follow us on Facebook. 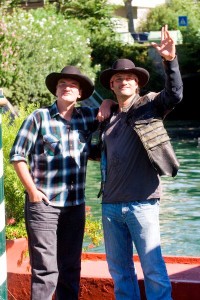 Rumors have it the duo has signed up a number of director friends to contribute “fake” trailers for the intermission. Returning will be Eli Roth, however it is unclear what his contribution will be. They also signed up long-time friend Kevin Smith and Hell Ride director Larry Bishop (we are hoping it will be for a biker movie trailer). This news comes amid speculation that Tarantino wants to work together with Tim Roth again, the two have been reported meeting a few times recently. Sources close to the director indicate that there’s a part in Cowgirls in Sweden the director wrote specifically for Roth.

For those too young to remember (I am kidding), Grindhouse was released in 2007 as a throw-back double feature bringing back the good old days of drive ins and exploitation theaters. The two films were later (and internationally) distributed separately, in longer versions, minus all the artificial scratches and “missing” reels, fake trailers and intermission. Sadly, Grindhouse was not a box office success at all, and would only later on home video and internationally gain reputation.

Some critics say it was marketed to a niche audience that would have gone to see it anyway, while most ads were not even mentioning the stars in it (Kurt Russell, Rose McGowan, etc.), hence the movie failed to pull in a mass audience. The concept however was fresh and intriguing and the directors have talked about doing sequels already back then. While Tarantino went on to make Inglourious Basterds and recently Django Unchained, Rodriguez turned his then fake trailer for Machete into a full-length movie, and its success allowed him to actually turn that into the trilogy they discussed.

If you’re a translator, or work in software or mobile app development, visit lingohub.com for your localization solution.