Fifty years ago, back in the good old days – even before the Vanishing Point days – young Quentin entered this world. “Action!” he must have yelled then to his mum Connie. When he was two, they moved to Los Angeles, and before Quentin Jerome Tarantino turned a teenager, he had already seen more movies than most people. In his twenties he started working at the Manhattan Beach Video Archives, where he made some important friendships and tried his hand at making a first movie. It would take another few years until he would sell the scripts for True Romance and Natural Born Killers, and shortly after go on and conquer the festival circuit in a storm with Reservoir Dogs. And so it began…. 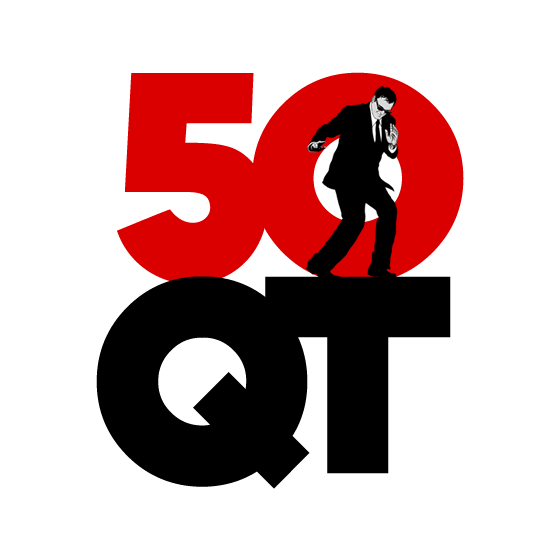 With Pulp Fiction, Q finally turned Hollywood upside-down for good, and established himself as, what they would then call, an “enfant terrible” of the new indie filmmaking community. To this day, Pulp counts as a seminal masterpiece, that sometimes even to his most loyal fans he has not matched again. After Jackie Brown, he went on some sort of hiatus for a while, not turning out a major motion picture until Kill Bill. It was that gap by the way, that saw the birth of The Quentin Tarantino Archives, a highschool project started by a young German who runs this website still today. Kill Bill turned into an epic, and manifested director Tarantino as the ultimate meta-filmmaker, opening the eyes of millions among the younger generations to lost classics, foreign cult cinema and the wild world of exploitation film.

It wasn’t until Grindhouse, the wildest night out at the movies since the actual days of grindhouse cinema, that I actually met Quentin personally for the first time (click here to read the interview). I didn’t know then that he admired one of tarantino.info’s (now very successful) side projects The Spaghetti Western Database, and we probably both didn’t know then that we’d  see each other only two years later, when he went on to shoot Inglourious Basterds in Germany (at Studio Babelsberg, where they named a street after him). His world war II epic connected on a whole new level especially with European fans, making it the most successful Tarantino movie in Germany then, only surpassed recently by Django Unchained, the movie that saw him (re)unite with some of the most talented people working in the business, and his most successful movie to date. Fans can now purchase Tarantino XX, a great BluRay box set celebrating his first twenty years of feature filmmaking, what better way to celebrate the auteur-directeur?

Quentin, you’ve gone on record saying you will retire some time soon, but I sincerely hope the spark of film-making stays strong in you for a long time still. I wish you a happy fiftieth birthday, and all the best for you, your friends and family. With the thousands of people visiting this website every day, informing themselves about your work, I want to also say happy birthday on all their behalf, and I am sure there are tons of birthday greetings in the comments section here, and on our social media channels. This might just be the biggest birthday party yet, being celebrated all around the globe. Personally, I might stop by at Tarantino’s Bar in Berlin later tonight, they’re hosting a birthday party for you.

Trivia: Also sharing a birthday with Quentin is Mike Breiburg, our LA correspondent, happy birthday! And honorable mention: Andrea Giordana of one of Q’s favorite spaghetti westerns The Dirty Outlaws.