I’m sitting in Pat & Lorraine’s Coffee Shop on Eagle Rock Boulevard, a few minutes outside Hollywood, having a late breakfast. There is a Reservoir Dogs poster right on the wall by our table. It’s the breakfast diner where the opening breakfast scene for Dogs was filmed, and it is one of its few remaining shooting locations that still exist. I’m discussing last night’s screening of Django Unchained with Michael, a long time veteran of the Tarantino Archives, who joined me seeing the film for the third time monday night at the DGA theater on Sunset Boulevard. Yesterday would have been the Hollywood premiere of Quentin Tarantino’s latest big movie, but after a press release by the Weinstein Company yesterday, the red carpet, party and public screening were canceled in favor of a small screening just for cast and family. In the wake of the terrible school massacre and a rekindled violence debate in the media, it had been being kept low key. It is not the only premiere this week that got canceled, by the way (I think Jack Reacher was another).

Django Unchained marks Quentin’s return to a very American subject, after venturing into European history (Inglourious Basterds) and sending the Bride on a trip to Asia (Kill Bill). He wanted to do a western for a long time, and even though many, if not most of his films, have strong western (and spaghetti western) elements, Django Unchained is his first pure western – and a ‘Southern’ at that. A few years ago he talked about making a John Brown biopic, but even for fans, the word that his next would be Django Unchained, was a bit of a surprise. The film is set in the antebellum south, centers around a freed slave, co-stars a German bounty hunter, features Mandingo fighting and strong spaghetti western elements. Here is my first impression – readers keep in mind that I will need a few more viewings to be able to form a final opinion on the film, and I have yet been able to resist the temptation of reading the script, but will do that this week. 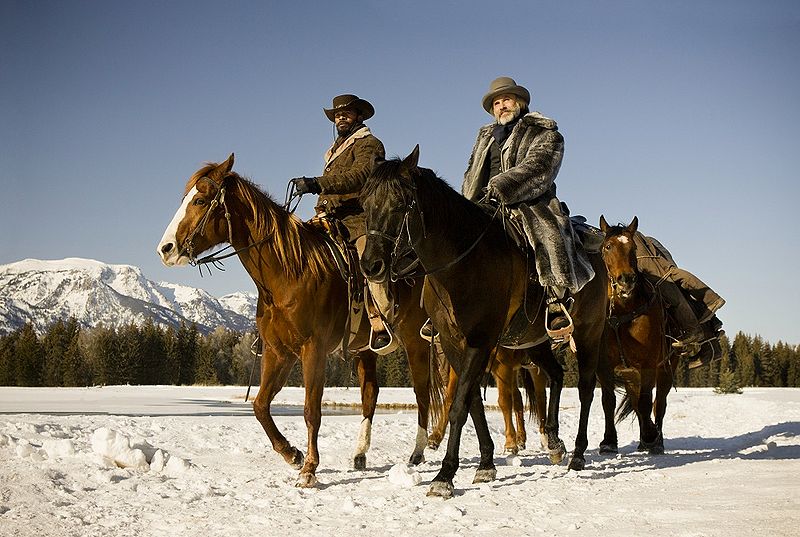 Django Unchained is about slave Django (Jamie Foxx), who is purchased off a chain-gang by German dentist-turned-bounty-hunter Dr. King Schultz (Christoph Waltz) in the middle of a cold night in Texas, two years before the Civil War. Schultz is after the Brittle brothers in order to collect their bounty, but has no idea how they look like. Having heard Django might have been sold at an auction related to them, he needs him to finish this job. He enters an agreement with Django, where he helps Schultz find the three brothers, and in return Doc Schultz will give Django his freedom. Django’s past strikes a chord with Schultz however, so the two team up for some joint bounty-hunting and under the Doc’s tutelage, Django turns into a formidable shot. At the end of the winter, they circle in on where Django’s wife Broomhilda (Kerry Washington) might have ended up. Before Django got sold, she had been taken from him and it is his goal to find her and free her. At one of the most famous plantations in Chicksaw county, Calvin Candie (Leonardo diCaprio) runs slave-on-slave fights to the death, Mandingo fights. The plantation is called Candyland, and together with his house-slave Stephen (Samuel L. Jackson), Candie has turned it into a gruesome place. They find out it is where Django’s wife is, so they come up with a clever plan to infiltrate the plantation and free her….

From the first minute, Quentin draws you into a gorgeous-looking cinemascope film (thank you, Robert Richardson) that makes great use of the interesting locations they had picked for Django Unchained, in California (Lone Pine) and Louisiana for example. While you are feasting your eyes on the visuals however, he takes you right out of your comfort zone and we are confronted with the gruesome reality of slavery, while at the same time the first bursts of laughter erupt from the audience, because this movie is both super hilarious and also dead serious about its topic. I was sitting in a very mixed audience, with at least one third clearly African-American, and ages from about 20 to about 70. I was a bit tense because there was at least some talk on the Internet about racism, language and violence, that might not sit well with some people. My test case was an African-American lady in the row in front of me, she must have been 55, and when she and her companion started laughing loud as well, I knew this movie doesn’t have a problem. Quentin manages to walk the fine line between gruesome violence and slapstick humor like only few others can. Waltz is a great comic relief from the first scene on, and it’s great to see him team up with an actor like Jamie Foxx, who can also be funny. Not to mention Sam Jackson, I will get to that in a bit. 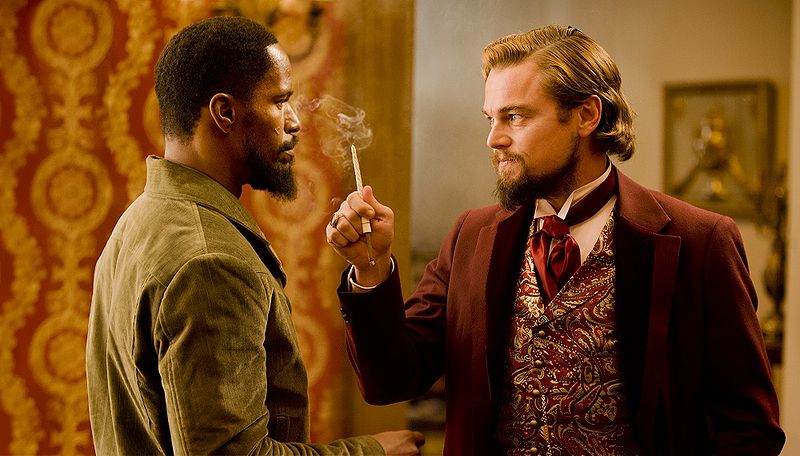 Let me get back to the visuals for a moment, however. Legendary production designer Michael Riva died during the making of this film, but if there is one thing that stands out is, that Django Unchained looks all around great, not just in terms of scenery, cinematography and lighting, but also the set design looks very convincing and real. Those are not empty sets, they are muddy, there are animals in the street, there is decoration on walls, there are interesting props, and you buy completely into the era it takes place in. Costume design also plays a very important role in this film and you can say that they did an amazing job in this, I hope they get an Oscar nod. Heba‘s make-up is also outstanding, especially when it comes to the bizarre look of Candie, I think he looked fascinating. Taken together, all these visual elements allow you to get completely immersed in these places, be it out in the wild, or on a plantation, the Cleopatra Club or the Saloon Django and Doc Schultz enjoy a draft beer before shooting a guy dead out in the street.

Interestingly enough, the movie marks two rather new things for Quentin Tarantino. One is, that he had artists contribute original music to the film, the other is that he does not always give all of the music a lot of room to play out and unfold (there’s a third new aspect, the linear structure and non-episodic nature of the story-telling). The soundtrack has a great deal of spaghetti western tunes in it, but also hip hop elements and songs ranging from romantic to dramatic. He always does a great job selecting the music for his films and this one is no exception. I was doubtful at first, but even the hip hop bits fit in quite nicely, but it might not be for everybody. The movie opens with a very well-known title track, and it is particularly great that Doc Schultz has his own little melody as well. Some tunes are truly great, and even though the soundtrack will not play on parties up and down like Pulp Fiction does, but it will grown on you. 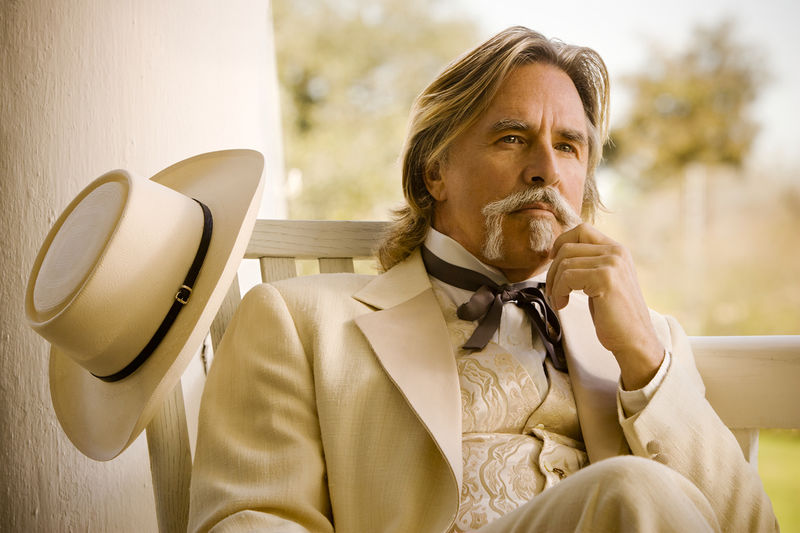 The script that leaked last summer is a lot more comprehensive than the movie you’ll see in theaters, which runs at 2 hours and 45 minutes. I do not think the film is too long at all, and it never feels really slow. There are some sequences that draw out a bit more than they probably have to, others would have benefited from a bit more material. Quentin talked about a possible extended edition and there was even things in the trailers, and in interviews, that you won’t see in the theatrical exhibition – the soundtrack also includes material that is not in the movie. One of the film’s few flaws is basically that it could have benefited from more tightening, while preserving this running time, so that some footage could have been reinstated, giving some characters more background. Quentin teases the audience a lot because every little part is cast with a popular face. Don Johnson, Zoe Bell, Kerry Washington even, Tom Savini, and a lot of other names have parts in the film that I am a lot more curious about, and wanna see more of. All in all, the movie feels round, but not as round as, say, Kill Bill. The non-episodic structure however I think is a huge plus for the film in terms of the narrative.

Django Unchained is never too violent, never too gruesome, and never too funny, even though I have to admit there was a scene where I had tears in my eyes from laughing so hard, but it was just meant to be a great comic relief before the movie would make a turn for the sinister again. I am talking about Samuel L. Jacksons entrance, which is hilarious. In a way, Quentin blends a revenge story with some slapstick, a slave drama, a western, a southern and a love story. This last element however suffered a wee bit from some of the footage-trimming, as especially some of the Jamie and Kerry material is missing from the final movie. The acting is really stellar and especially Samuel L. Jackson knocks it out of the park. Along with Leonardo Di Caprio, he is the stand-out performance in the movie. Some others, as mentioned above, don’t have enough screen time to shine enough and unfold, including Walton Goggins and Kerry Washington. Even Django himself is overshadowed by the army of great characters he is surrounded by. Which is not necessarily a bad thing, in fact it makes it such an awesome experience, but with those towering performances that are Calvin Candie for example, it is tough to live up to one’s own role maybe. As I said, roundedness, that’s all. Otherwise be prepared for Tarantino clockwork awesomeness. 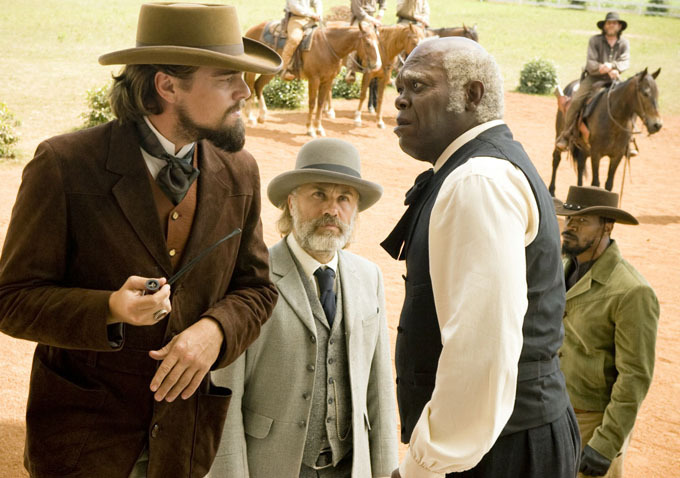 Django Unchained is a long overdue entertaining treatment of the material at hand, and it accomplishes cinematic entertainment on a very high level. The visuals, the acting, the narration, the directing, they all come together in one great epic “made in Tarantinoland”, that entertains, throws down gauntlets, grabs you, lets you go and laugh, and makes you part of the experience. I loved the movie, I sat until the curtains closed, wiped some of those tears of laughter out of my eyes and said “I need to see this again”. I think it is the best movie of the year, it will go on to win a lot of awards and change a lot of people’s lives, like Quentin’s movies always do. They open the eyes of thousands (especially among the younger generation) to overlooked genre classics (ask around in your family about spaghetti westerns), different ways of storytelling and epic narratives too often drowned out by the avalanches of bad movies kids watch these days. .

Go see Django Unchained when it comes out, see it several times, see it with friends, enjoy it. Is it Quentin’s towering achievement? I think the best is yet to come (don’t retire, Q!). The movie has a few flaws that stop it from being truly great, so probably A- from my end, on the Tarantino scale, which is still better than thousands of other A movies out there so there you go fellow Tarantinoites, Christmas is almost here, and Santa brought 165 minutes of awesomeness. And if you’ve been wondering, the D is silent, and he’s one exceptional nigga. 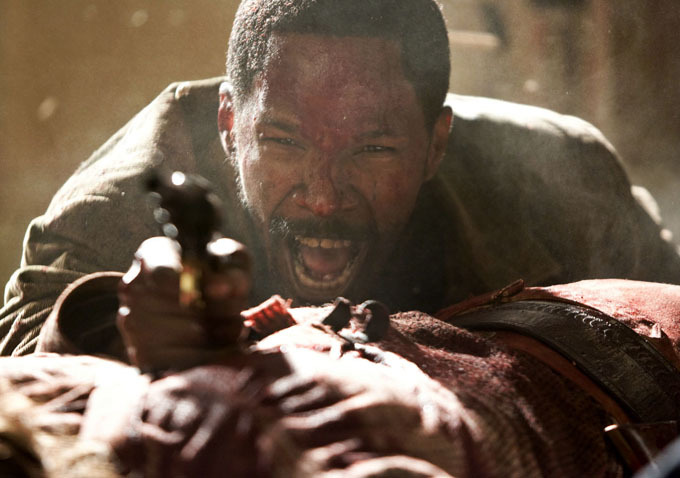