Photos from the Berlin premiere of Basterds

As promised, a fistful of snapshots from the Berlin premiere of Inglourious Basterds, click the picture below to see them. We’ll bring you a full review of this epic world war 2 extravaganza pretty soon. As described in our previous report on the premiere, it was quite the event. Please check out a series of more professional photos here, here and here also, to get a better look at the stars on the red carpet. 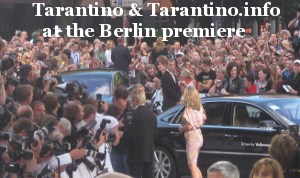