When you are a quarterback, and looking for someone to pass the ball to, you sometimes get hit from the side because either a team mate did not do their job right or you just got surprised. Well bazinga, as that Sheldon Cooper character from The Big Bang theory would say, I was about to hit the sack and let the couple of brewskies put me to sleep when something happened in the Tarantino world….

If you follow this website, just recently or maybe since when we started it almost 10 years ago, you might or might now have smelled it. It was awfully silent, I mean aside from Ball’s birds, and something seemed to be rotten in Denmark, as they say. Well, if you’ve been wondering what Quentin Tarantino‘s next movie will be, the wait is over. Quentin has put pen to paper recently (which pens you should really know, as a true fan) and after what is known as publishing day, another ‘magnus opum’ is now seeing the light of day.

Tarantino fans rejoice, for what we have here, officially, is Senor Q. T’s latest ….. DJANGO UNCHAINED

And while you are recovering from your heart attacks, let me run this down for you my friends, geek style. The two-word Tarantino movie title is back, and we have a deuce reference. Of course to the ever legendary spaghetti western Django of 1966 by Sergio Corbucci (click this link now if you have no idea who either of these are), and of course Sukiyaki Western Django, by the revered Takashi Miike in which Q shot a snake! Django is of course the fella with the gatling gun in his coffin…  but what if QT unleashes a Django onto the screen? Fiesta…..

At this point we cannot confirm whether this has anything to do with recent rumors that this might be Quentin’s “southern” or if it is a “real” spaghetti western or anything else. The whole script does not seem to have leaked, but you don’t wanna be a leaker considering the legal troubles that would get yourself into. TWC’s lawyers will most likely come down on you like the guns of navarone, they will be Superfly TNT…. so be cool, fonzies. We will keep you posted on further developments, and watch this space for more (we will be adding some links below the script cover)!

Photo of the script cover: 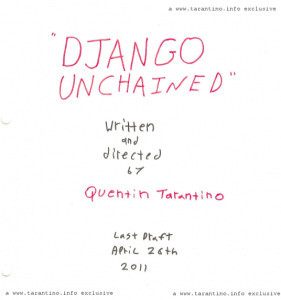 Click here to enter our community, that is rumor central!

Finke has chimed in and added a couple of production details. Most importantly, the movie will probably start shooting this fall. Click here to read the article.

Thompson on Hollywood has compiled some more facts on the business side and in terms of story. Click here to read the article