Report from the Berlin premiere of Inglourious Basterds

“Dankeschoen!” he said, visibly moved, after several minutes of applause. A Basterd’s work well done, I thought, when the lights went on and Quentin Tarantino had just ended the second world war – on celluloid. 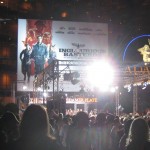 Fast forward two or so hours earlier. The Berlin premiere of Inglourious Basterds, probably the movie’s biggest worldwide (aside from the one in Cannes a few weeks ago) was one hell of an event. Fans had lined up outside the theater long before anyone started walking down the red carpet, and the fella from Germany’s Pro7 TV station did his best to entertain them. One could tell he did his homework, mentioning all sorts of nerdy details about the movie, I was actually impressed. His interview questions for some of the stars arriving at the carpet were less impressive however, at one point Christoph Waltz even cut him off and made him look like an idiot, which was hilarious, because at that point most of the premiere’s guests were already seated inside, and they projected the broadcast of the show outside on the screen inside for the already seated guests to see the stars arrive without giving up hope for a good seat. Half an hour before the lights would go out, they all arrived, to a screaming crowd of hysterical teenagers and armies of photographers. Diane Kruger, Daniel Bruehl, Til Schweiger, August Diehl and others, then Quentin Tarantino himself, and of course the reason for all the hysterical girls screaming like nuts: Brad Pitt, with a beardo and pimp sun glasses, enjoying a round of autographing on that beautiful summer evening in the city that’s his second home (click here for a quick video from the Associated Press).

Universal Pictures, which is distributing the movie internationally, had invited hundreds of people to the premiere, there were posters and banners everywhere. This was Basterds territory, clearly. Hordes of local celebrities kept flocking in, but in the end, everyone was seated in the auditorium, to a thundering applause. The lights go out, and we’re about to watch…. Inglourious Basterds, the – roughly – sixth movie by Quentin Tarantino, only months after he and his amazing cast and crew had finished shooting only a few minutes outside of the city, where they had named a street after him only a day or so before. “It’s also at the corner of Pabst street” he proudly proclaimed later. Applause, for almost every big name that pops up during the opening titles, then a veil of silence falls over the audience (which included almost all the German cast of the film, plus Quentin, Lawrence Bender, Brad Pitt and a whole bunch of amazing people). We’re in Nazi-occupied France now, once upon a time…..

I’ll be back soon with a review of the movie, and some links to pictures, as well as some interview snippets. Stay tuned, you Basterds, in the meantime watch a video I took at the red carpet: