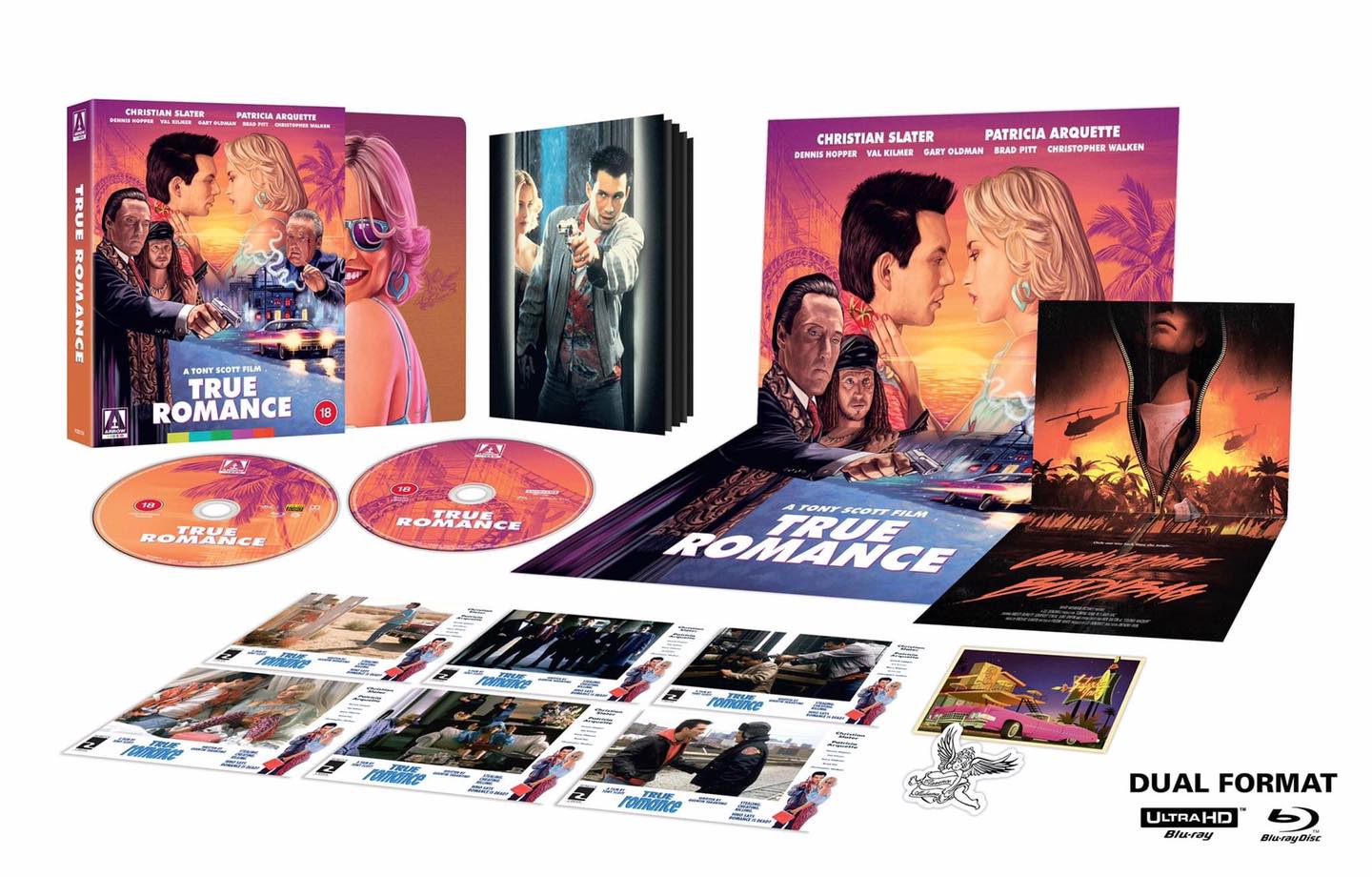 I finally got my hands on a copy of Arrow Video’s release of True Romance last fall (I only got around to reviewing it now). Unfortunately not the 4K UltraHD (but I plan on getting it), but since I do not have a fully UHD-enabled home cinema anyway, that’s no obstacle. The disc is already in its second pressing, with the first, limited collector’s edition versions, no matter if Amazon, Zavvi or other store exclusive edition, quickly sold out and going for lots of money on Ebay, and a second bare bones release still just now barely available or still mostly available anymore (click here for our overview). The second pressing standard editions are for example availble on Zavvi and some other outlets, or at horrendous prices on Ebay. But to some googling around, you might get your hands on a copy, because as of yet, there is zero information about a possible third pressing from Arrow or really any release of this around the world. So at this point, the Arrow release is a singular opportunity. Let’s dive in.

What made this release so exciting are three things: First, it includes both the preferred (by fans, audiences, the director and the writer) director’s cut version of the movie and the initial theatrical version; second the disc includes newly remastered versions of both of these cuts, so it should look way better than previous iterations, especially if you get the 4K disc, and Third, it has some very interesting new extras that will allow you to dive a bit deeper into the movie, while also carrying over previously available extras. So let’s have a look at itw.

The story should be fairly common knowledge, but just to summarize, the movie centers on Clarence (Christian Slater) a lonely guy in Detroit who works at a comic book store. His boss sets him up with a callgirl Alabama (Patricia Arquette) for his birthday, who pretends to bump into him while he’s on his usual loner birthday routine: watching karate movies. The two get along all too well, so well that she comes clean and the two fall in love and get married right away. Bothered by the existence of her former pimp, he goes on and confronts the guy, Drexl (Gary Oldman), kills him in an ensuing confrontation, and grabs a suitcase with Alabama’s old stuff. The problem is: instead of her things, the two lovebirds end up with a suitcase full of coke. They’re in deep shit now, as the coke belongs to Blue Lou Boyle, a boss of the underground, so they say goodbye to Clarence’s dad (Dennis Hopper) and drive off to Hollywood, where they intend to sell the coke to big time movie producer Lee Donovitz (Saul Rubinek) with the help of Clarence’s old pal Dick (Michael Rapaport) and his agent Elliot (Bronson Pinchot). With the mafia on their toes, and the cops closing in on tinseltown drug shenanigans, it’ll be a test if true romance wins…..

Now I make it a point of not watching the old theatrical cut, I don’t even know whether the first times I have seen True Romance (probably on TV in the late 90s) were the theatrical or the director’s cut, but there’s just not really a substantial argument to be made in favor of the theatrical cut, I believe. But it’s for completists and nostalgics and I think it its fantastic that both are still available.

Rewatching it after so many years not only did I get all misty eyed, but I really want to say this may be one of the best movies that came out of the 90s after all, ripe for re-appreciation by a broader public, something this movie did not enjoy when it came out way back then. It’s just got so much heart, such great writing and it’s just all around a fantastic motion picture experience that will grab you by the balls… and the heart. Hans Zimmer‘s score is not the most original composition but it’s a fantastic and heartwearming score that adds so much to the character of this – one of the most romantic – movies ever.

What makes the movie so great is not only the great script with impeccable dialogues and some quirky oddball characters, but a whole roster of great actors playing everything from quasi leads to almost extras (as in Sam Jackon‘s case). The late greats are in there, such as Conchata Ferell, Dennis Hopper and Chris Penn (who knocks it out of the park along with Tom Sizmore, a delightful duo). The movie is just full of supporting roles that ooze talent and stardom, I mean, fathom this, the one role in this movie that is arguably the lowest is that of Floyd the podhead and that’s played by Brad Pitt, one of the biggest movie stars on the planet today. And the balls of this movie! Chris Penn gets one scene, and that’s discussing weird racial theories with none other than Dennis Hopper, before delivering an uber cool one liner and blowing his brains out! No wonder folks didn’t get it back then, the audience just wasn’t cool enough for this.

The late Tony Scott delivers a movie with a lot of heart and some gritty violence, but it’s also a typical Scott movie – a gritty look at a world that we haven’t seen told this way. And the showdown becomes pure Scott but also takes a big bite out of the John Woo playbook: violent, poetic, dramatic, surreal. True Romance is a prime example of excellent, creative and cinematic 90s filmmaking that delivers an early taste of Quentin’s knack for characters in writing scripts that are about captivating stories one can relate to without having to be a coke dealer of course. I was so happy to rewatch this, what a beautiful movie.

On the image of the disc, I have to say, jumping back and forth between the old release and this one, the difference is not gargantuan, but you will notice much more realistic and vibrant colors, far less dirt in an overall clearer picture, and just a noticeable bit more detail and depth. All in all, it is a clearly and objectively better transfer – but not a revolution. To be fair to the restoration work, this has a lot to do with the tricks our eyes play on us, so I googled a 1:1 screenshot comparison and the difference is really something, especially the UHD, it offers so much more detail and authenticity in respect to the source material. It is an even more different thing of course if you have the 4K, that should put you in a whole new category of detail and color depth, with the HDR color range and all that.

Sound is always harder to compare, but my impression is that they ran the material through more up to date processing and it offeres a bit more range and is less compressed. It sounds really great no matter if you select the surround track or the stereo track. All tracks have a minor flaw, and that predates this edition, is that slight dialogue touch ups have gone to the detriment of background/ambience sounds which, if you listen super close, may sometimes seem distorted or sporadically muted, but it doesn’t hurt the overall experience and the added clarity of the dialogue is a much welcome effect of this.

Where the disc shines are the extras. Here you will find of course the excellent audio commentary that Quentin did for the earlier release, which should be a must for every fan. I am not going to go into much detail on the old extras, any self respecting Tarantino fan should be familiar with these. Next to the excellent commentary by Quentin, there is also the commentary with Tony Scott, which is of course also a must, and one with Slater and Arquette, which has always been the least interesting commentary out of the three (in part because both of them don’t seem super excited) but is still worth checking out. New on this disc is a commentary by Tim Lucas. He has the benefit of hindsight and takes a much more meta and bird’s eye view on the movie and would rank right after Quentin’s in richness of trivia and pop culture references. It’s definitely a welcome addition to this disc, very well informed and entertaining.

There are a few scene specific commentaries as well, by Dennis Hopper, Val Kilmer, Brad Pitt and Michael Rapaport from 2002 and two new ones by Bronson Pinchot and Saul Rubinek that are new to this disc. Some of these are brilliant commentaries, whether it’s Pitt’s look back or Rubinek’s (which was done over the phone). These are all very enriching and if they had had more of these they might’ve just as well have edited these together into one movie-accompanying track. Then there’s a few new interviews, with Susan Becker (10min, custome designer), Michael Tronick (13min, co-editor), Mark Mancina and John Van Tongeren (12min, composers), Larry Taylor (8min, author of Tony Scott: A Filmmaker on Fire) and lastly with Dan Storm (8min; co-founder of the annual True Romance Fest and now owner of the cadillac). Of course these names won’t necessarily ring a bell with most people, but that’s part of why these are nice.

There are the deleted and extended scenes previously known with optional commentary by Tony as well as the alternate ending with optional commentaries by either Tony or Quentin, and then there’s what Arrow calles the electronic press kit, this is tons of stuff that was part of the advertising campaign: four featurettes and five interviews from back then. But on top of that there’s of course trailers and TV spots as wella s image galleries (consisting of production stills as well as video and poster art work).

All in all, I have to say I was in heaven watching this. Not only am I of course a huge fan of the movie, but this is a noticeable upgrade. It looks better, it sounds better, than the old releases that you may own either from Warner or as part of the Tarantino XX box set. The additional extras are well worth the time. Highly recommended, and I hope this or a similar edition will also come out in the Americas or the EU, as these UK-only Arrow releases abre increasingly hard to get. So…now… Warner Brothers, or whoever has it in their hands to make this edition truly go global and reach every movie-loving household, in the name of TJ Hooker’s William Shattner: make it so.

A press copy was provided to us from Arrow Video. The screenshots are scaled down, from the BluRay, humbly poached from the excellent bluray.com