We’ve been a bit quiet on The Hateful Eightt recently, however we do post all kinds of updates on our social media channels. We’ve been fairly busy with work on our sister sites SWDB and GCDB. News out of Hollywood however is, that Quentin Tarantino is taking The Hateful Eight to San Diego’s International Comic-Con. So here is a short run-down on The Hateful Eight news that you might’ve missed over the last couple of weeks.

The Hateful Eight heads for Comic-Con

It was revealed that Quentin is taking The Hateful Eight to San Diego’s International Comic-Con, the world’s preeminent convention for all things comics. Together with some of the cast and crew, he will host a panel discussion where he will among other things talk about the 70mm release and show some exclusive footage from the film. If you’re attending SDCC, make sure to be in Hall H on Saturday, July 11 at 1.30pm. (Source)

While domestic distribution in the United States is all set with The Weinstein Company, along with a limited 70mm roadshow release starting Christmas day followed by the wide release January 8, international distribution deals are not all set yet. There will not be one global partner this time, as TWC and Quentin are picking distributors on an individual basis. Considering the almost non-existant 70mm penetration in most countries, that can hardly be a pitch for distributors, so I am not entirely sure what they’re after.

In Italy, the deal went to RAI and Leone Film Group (Source), an understandable pick in some way, the green light for distribution in Germany went to RTL Group (Source) which to me (being based in Germany) feels unfortuate, RTL being a low-brow, soap opera an reality TV entertainment corporation that is not in anyone’s high regard when it comes to theater. They have the theatrical (through their company Universum Film), TV and video-on-demand rights. The others known so far are Entertainment Film Distributors in the UK, SND M6 in France, eOne in Benelux and PVR in India. An international exclusive Netflix deal that TWC originally wanted, fell apart (unfortunately I think. There would be no greater gift to movie fans worldwide than a more or less unified, highly accessible, and unrestricted way to legally enjoy this movie online. (Source)

At the Cine Gear Expo in early June, Quentin Tarantino and Robert Richardson demoed some material from The Hateful Eight at Paramount Theater. The footage was said to have turned eyes. According to the article, TWC and Paramount may be equipping about 50 theaters in the US with 70mm capability, and they’re working on the best way to conveying the experience with the subsequent digital release. The Hateful Eight was filmed on a 65mm negative and reportedly the first 70mm production to use Ultra Panavision 70mm anamorphic lenses since Khartoum. Large film magazines were developed for QT and Richardson to enable long takes by Paramount in conjunction with Kodak (film) an Fotokem (the lab) (Source).

Bill Bennett tweeted what could be demo material from The Hateful Eight, on Twitter:

First reactions to an early trailer in Cannes

Even earlier, at the Cannes Film Festival, some reports described early reactions to a trailer shown by TWC. The 90 second teaser showed the main characters and premise of the movie (Source).

Lastly, in case you missed it, Entertainment Weekly premiered a set of exclusive pictures that were part of their lead article on the movie. Check them out here. 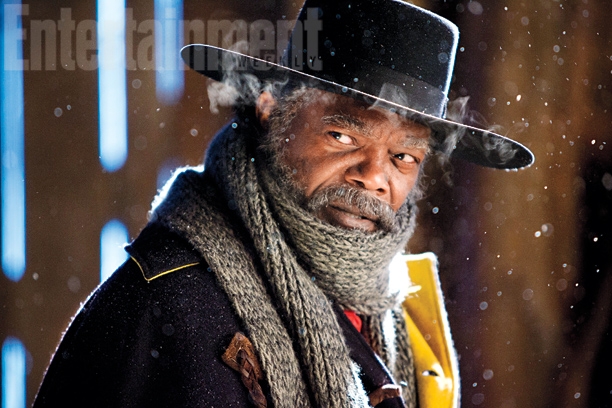 Thanks for reading. Make sure you follow us on our social media channels, and also check out our sister projects.