The Tarantino Archives Christmas Shopping Guide is Back

Before all the political correctness comments come in: it’s our December shopping guide for those who are in need for gifts this time of the year. The Quentin Tarantino Archives, and also its sister sites, have a tradition (not very well kept) of publishing some personal christmas shopping recommendations, and I thought it’s time to bring that tradition back. So here we go, a selection of great movie shopping items that I personally picked out, they have my seal of approval as cool holiday gifts for a loved one (such as yourself! I am kidding). Scroll through. There should be something for everyone. I would of course be curious to find out what Quentin Tarantino himself thinks of my shopping recommendations, which are of course my little help in turning you all into happy little cineasts in Quentin’s mold :) And we will follow up soon with some ideas of what to watch to prepare for The Hateful Eight. Many thanks also to our Facebook followers who contributed some ideas to this list, when I decided to extend it to 20 titles :)

This isn’t the first time Grindhouse Releasing brings out this classic Lucio Fulci masterpiece, but this time it’s a newly remastered, 3-disc BluRay edition that you cannot miss. It’s the uncensored directors cut, it’s HD remastered, it’s two BluRays and a CD, it boats a bone chilling ” 5.1 DTS-HD Master Audio surround sound re-mix by Academy Award winner Paul Ottosson”,  audio commentaries and tons of other extras. Get it while they last. It comes out February, so pre-order now.
Learn more about The Beyond at the Grindhouse Cinema Database

Not the first spaghetti western on this list, but for the first time ever, the full length Italian version is available in the US on BluRay, and Blue Underground did a fine job presenting this one for the fans. It’s one of two major Mexican revolution movies Sergio Corbucci made, the other one being The Mercenary. Companeros stars Franco Nero and Tomas Milian along with Jack Palance and a very young Iris Berben, the German TV star that looks as great as ever. Where was I? Oh yea the revolution. A great western.
Learn everything there is to know about Companeros on the film’s page at The Spaghetti Western Database.

3. The Wolf of Wall Street

It’s the longest Martin Scorsese saga you’ll have to sit through (correct me if I’m wrong), but damnit it’s a Martin Scorsese saga. The Wolf of Wall Street is a high adrenaline tour de force with a Leonardo Di Capro who is on fire. If you like classic Scorsese dialogue, great acting, a great soundtrack and some really intense storytelling, this movie is for you.
Click here to read the epic review at Furious Cinema

This new BluRay and DVD combo release brings the classic spaghetti western to the US for the first time, remastered, chock full of extras, and with the superior international cut of the film (a lot of nuance and story gets lost from the cuts). They have done a great job bringing The Big Gundown to home cinema, and if you know the movie, you know what I’m talking about if I say, no James Bond title sequence comes close to the goose bumps this one gives you.
Learn everything about The Big Gundown at the film’s page in the Spaghetti Western Database.

Order from: Amazon.com | Amazon.de (this is a different but also great release) | Amazon.co.uk | Amazon.ca 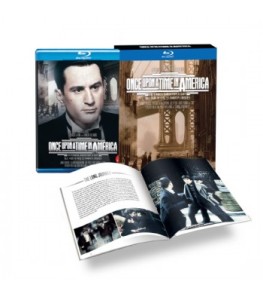 5. Once Upon a Time in America

One of the greatest epic movies of all time returned this fall, in a restored version overseen by Martin Scorsese and the Sergio Leone family. An effort was made to restore the movie to its Italian premiere version. The “extended director’s cut” as it is called in some places, adds almost an hour of new footage (the quality of which is inferior to the rest of the film’s footage, which is a great transfer I have to say). There is really no way around other than getting his a.s.a.p. If you love the movie like I do, it is a joy experiencing it a version far superior than previous TV or DVD editions. Warner should be slapped across the face for being so skimpy on extras, but overall, Once Upon a Time in America is a friggin’ masterpiece, and you shall spend a day of your life watching and savoring it.

This movie is notoriously credited and quoted as one of Quentin’s favorites of this or last year. I haven’t seen it yet, but it’s done well on the festival circuit and has already been on Netflix for some time. It has gotten a decent BluRay treatment, so it’s a good opportunity to check it out. I am told it’s not for the squeamish.

The 25th anniversary release of this critically acclaimed, milestone anime masterpiece is a great opportunity for anyone, newcomer or aficionado, to dive into the world of the Japanese animated movie world. While personally, I enjoyed Metropolis even more, Akira has that rare, timeless, ambition and tremendous imagination you rarely see in a creative work. There has been talk for some time of a real life remake of that movie. I am sure Hollywood will screw it up, despite today’s CGI powers. Nothing beats human imagination.

I love this movie. Finally available on BluRay, this often overlooked Michael Cimino heist movie personifies a lot of what I love about movies of that era: they were relatively subtle, often quiet, they developed slowly, let images do their magic on the viewer, and left a legacy that was far bigger than the explosions, dramatic soundtrack or actors involved. Think The Getaway, or Rollerball (also on this page). Thunderbolt and Lightfoot is a cult classic, and if you’ve never seen it, you better get to it, man.
Read a review over at Furious Cinema.

You will recognize the soundtrack from Jackie Brown. Lorber finally brings this blaxploitation classic to BluRay. It’s yet another of the “what would Tarantino buy” category I would say. It blends classic crime detective story elements with strong blaxploitation characteristics, a very atmospheric soundtrack and some really really strong acting performances.
Read a review over at Furious Cinema

After the genre-redefining Sin City, Frank Miller and Robert Rodriguez followed up the graphic-novel-to-big-screen adaptation of Miller’s workds with “A Dame to Kill For”, a so-so sequel that sacrificed some depth to more violence, more cool one-liners and a luckily never ending supply of scenes with Eva Green in the nude. So basically, it’s a perfect guys movie, but it feels a bit long. It’s still kicking ass though and I thoroughly enjoyed watching it, even with all that 3D stuff.

Getting this on Criterion should be a joy. It’s completely off topic, but I nevertheless highly recommend this movie. Sometimes a movie comes along that celebrate the joy of life, individual freedom, emotions like love and envy, lust and an urge to express yourself. This is a road movie that is so much more than a road movie, it’s a movie about growing up, a movie about giving a shit about conventions, it’s a movie about learning about life… and also about having tequila shots and swimming in the pacific. You gotta love this one.

The original Rollerball is – in my opinion- a masterpiece of dystopian filmmaking, and a classic. Never mind the shitty ass remake from back in the dark 2000-something years, this classic is killer. It is very long, and light on the action, but as a midnight movie, this should perfectly transport you back to the good old days of sci-fi filmmaking.

Yea, you’re thinking “silent movies, what the fuck”, but bear with us. If you’ve watched Inglourious Basterds closely, Linder’s works get mentioned, and if you’re int European cinema, and want to broaden your horizon, here is your chance to know more than just Charlie Chaplin. 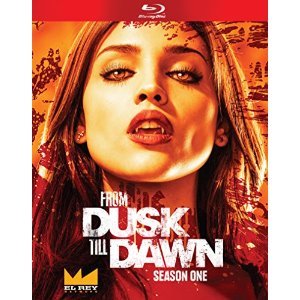 Robert Rodriguez‘ TV re-imagining of the classic From Dusk Till Dawn will not please everyone. You’ll either hate or love how the show fills in all the gaps of the movie, demystifies its origins and PG-13s down the original movies Rated-R-ness. But still, it’s hellishly entertaining and has a great cast. If you missed it on El Rey (most people can’t watch that), now is your chance. It’s also on Netflix.

A movie that really needs no introduction. I will nevertheless try one. The 40th Anniversary BluRay of the original teenie slasher movie has changed the horror movie landscape forever. A new kind of terror came to tinseltown that pitted clueless kids against hick mass murderers and exposed a side of filmmaking that had its roots in the Easy Rider revolution: low budget arthouse experimental filmmaking that unleashed a wave of creativity not seen all that much ever since. The movie has been banned in many countries around the world, even though by today’s standards the movie is rather tame on the gore – but it can still scare the shit out of you, especially if you have proper home video equipment at home that you can feed this BluRay to. Enjoy….
Learn more about the movie at the Grindhouse Cinema Database

The last entry in the “what would Tarantino buy” category. Burt Reynolds is Gator, a moonshiner out for revenge, making a deal with the government to help them take down an illegal liquor ring. A high octane, good ol’ Hixploitation gem that’s got plenty of kick! Co-starring Ned Beatty, Bo Hopkins, Jennifer Billingsley and Matt Clark. You find its soundtrack clues in Inglourious Basterds, and it is one of Quentin’s favorites. 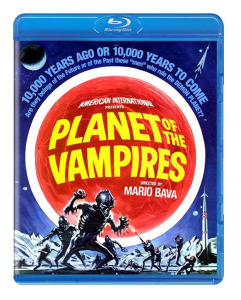 17. Planet of the Vampires

Don’t you just love Mario Bava? What I love even more is this exact type of sci-fi movie. Kino Lorber only just released this BluRay a few weeks ago, but it is already high on my list and one of the last movies in this series that I want to recommend. Vampires. Planets. Sci-Fi. It’s just the quirkiest mix and comes with such levels of exploitation awesome. Nuff said. Buy!

It is not just the amazing looking cover art that won me over. I am a huge fan of Walter Hill, and Southern Comfort is no exception. This promises to be quite the amazing BluRay experience.

Read a retrospective on Walter Hill at FuriousCinema.com | A review of Southern Comfort | the BluRay release announcement

William Friedkin’s Sorcerer is a very interesting case, which is detailed at some length in its Wikipedia article. If you have seen The Wages of Fear, you know the premise. The movie didn’t to so well but has gained standing over the years, and now a restoration overseen by Friedkin is finally available on BluRay. I am very excited to see this one, which he deems his finest achievement. 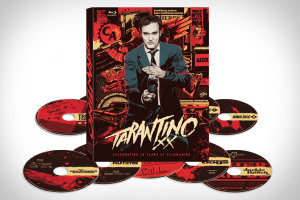 Lastly, even though you as fans probably own it already, what better gift to give than the gift of Tarantino! The Tarantino XX movie collection is a super cool looking collection of 20 years of Quentin Tarantino’s film-making on BluRay (in some countries also DVD) that should get every cineast kick started into the Tarantinoverse. It comes in a specially designed packaging and with some extras not included in previously available editions. Click here to read our review of this box set (here in German).

If you want to support us and the sister projects, visit The Triple Feature Foundation website today and donate a fistful of dollars. We highly appreciate it.