October at the New Beverly Cinema: A closer look

With Quentin Tarantino re-opening the New Beverly Cinema as a celluloid-only picture house, we are taking a closer look at a few of the movies he is programming this month. Every town on the planet should have a New Bev, but since that’s not the case, here’s a way to discover the movies and hunt them down on your own, program your own movie night with friends. We really recommend listening to Quentin’s recent appearance on Elvis Mitchell’s The Treatment.

Four of this month’s highlights are (aside from Tarantino’s masterpiece Pulp Fiction, which screens along with Leon – The Professional, and Reservoir Dogs which is included in some midnight screenings): 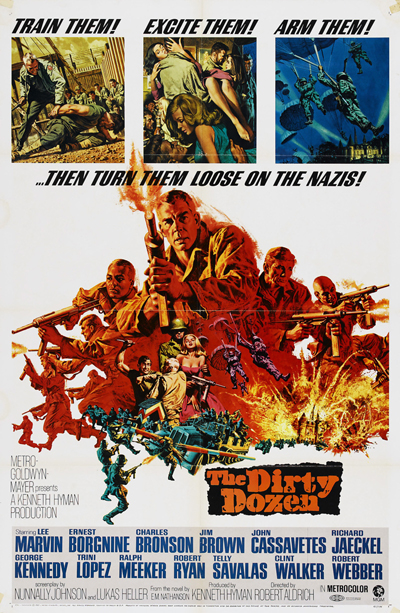 In 1944, during World War II, a group of deranged Army criminals are offered a reprieve if they agree to be part of a mission to infiltrate and destroy a Nazi compound. Since most are facing death or a long stretch in prison, they take the job. The movie works partly as a character study of the men (who are all a bunch of authority hating misfits) as well as a highly entertaining, humorous, action packed WWII adventure. The stars are some of the greatest movie tough guys of their time and include: Lee Marvin, Charles Bronson, John Cassavetes, Jim Brown, Telly Savalas, Donald Sutherland, Clint Walker, Robert Ryan, Ernest Borgnine and Ralph Meeker. For fans of War movies, this is one of the crown jewels. The Dirty Dozen along with Enzo G. Castellari’s Macaroni Combat cult classic Inglorious Bastards would be main inspirations for QT’s own World War II epic Inglourious Basterds.

QT screens the movie along with his own trailer collection themed to the movie. 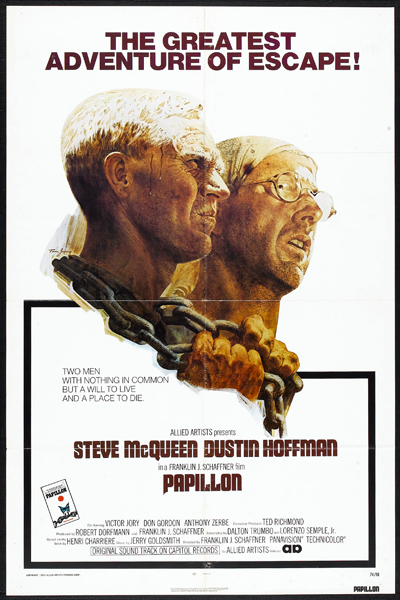 Based on the true story of Henri Charriere, “King of Cool” Steve McQueen stars as the titular “Papillon”, a wrongfully accused Frenchman who is tried and sentenced to serve a lengthy prison term in the hellish penal colony of French Guyana. Along the way he forms a close friendship with Louie Dega (Dustin Hoffman) a geeky white collar criminal that needs Papi’s help to fend off the convicts and nasty guards. Papillon and a few of his fellow inmates later break out of the joint but have to contend with seedy South American bounty hunters and other dangerous characters trying to catch them. This is one of McQueen’s most powerful performances and best films of his career.

Fans who attend The New Beverly Cinema screening will get a special treat in the form of 20 extra minutes of never before seen footage from Steve McQueen’s own 35mm print. 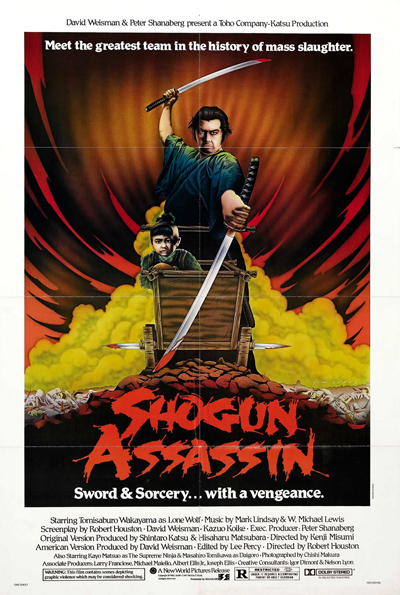 In 1980 Roger Corman’s New World Pictures released this film and it became a smash hit in the urban grindhouses. Producer-Director Robert Houston (who was a huge Japanese film fan) bought the rights from the first two Lone Wolf and Cub films (Lone Wolf and Cub: Sword of Vengeance and Lone Wolf and Cub: Babycart at The River Styx) and edited them together. The film combined 11 minutes from the first film and 70 minutes of footage from the 2nd. Around the same time Shogun Assassin was released, the TV miniseries Shogun (based on the Best Selling Novel by James Clavell) made its debut. The ninja-samurai craze had just started in the USA. This was a perfect time for Houston to unleash the fury of Lone Wolf and Cub on US audiences. One of the major differences between Shogun Assassin and the originals was the English dubbing which contained the added voiceover narration by Ogami Itto’s baby son Daigoro. Voiced by Gibran Evans, (the son of the film’s promotional artist Jim Evans) Daigoro acts as the inner-conscience of the story and has a softening emotional effect that the originals do not contain. As Robert Houston stated, he thought this addition to the film would help the American audiences be more open to the foreign aspects of the story. Another new addition is the modern electronic soundtrack created by Mark Lindsay (member of the 60s garage rock sensation Paul Revere and The Raiders). Since the original films contained a small amount of soundtrack music, this really gave the film a kind of audible excitement.

The Bride and her daughter watch this on TV at the end of Kill Bill. Click here to read the Grindhouse Database entry on the movie. 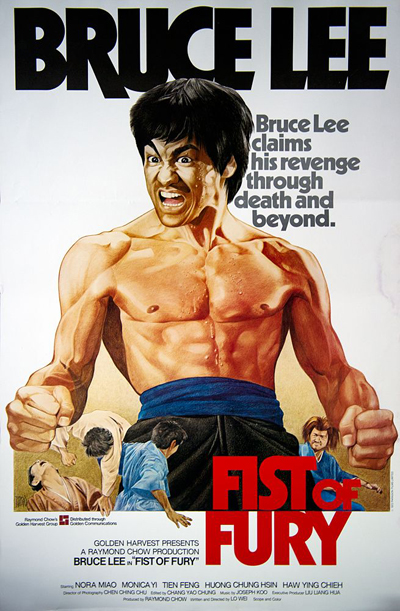 Also known as The Chinese Connection, this was the follow up to The Big Boss, (the highest grossing film in Hong Kong up to that time) which came out a year earlier. Set in early 20th century China during the Japanese occupation, the legendary Bruce Lee stars as Chen Zhen, a martial arts student who returns to his hometown to marry his fiancee (Nora Miao). Chen soon discovers his beloved martial arts teacher has died and suspects that the treacherous Japanese, who have opened a rival training school in town, are behind it. The animosity between the Chinese and Japanese factions is a driving force behind Chen turning from a humble, peaceful man into an unstoppable force of renegade kung fu fury. His sole purpose in this movie is to take The Japanese on and show them that The Chinese are not “Sick Men of Asia” as one of their insulting signs proclaims. This movie further showcased Bruce’s incredible screen presence and extraordinary talents as an action star/martial artist. Fist of Fury went on to knock The Big Boss from its #1 spot and gave Hong Kong audiences yet another heroic tale to cheer about starring their “Little Dragon”. Bruce’s next movie, a Hollywood/Hong Kong co-production released in 1973 (you know which one it is), would turn him into an international sensation!

We’ll be back with a look at next month’s movies at the New Beverly Cinema, it will be published at Furious Cinema.