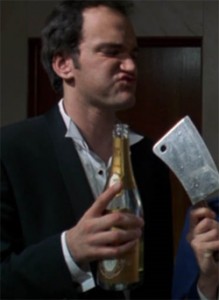 The year 2008 is almost over and we’re speculating already about the movies that will define 2009. Inglourious Basterds will certainly be among the movies that will cause big headlines. Not only is it a WW2 movie, it also has an ensemble cast and is directed by Quentin Tarantino. It’s not yet clear whether the film will be ready on time for the Cannes Film Festival, but there are several signs that indicate the movie might hit a theater close to you this summer. A Turkish distributor is talking about June, some other sources also point out that vicinity. It’s gonna be a hot summer. And this will be my last post for 2008. I wish you all a great New Year’s Eve. Drink some Crystal, drink hard you hard drinkers, don’t do anything I wouldn’t do though, which basically leaves you lots of options. Maybe watch Four Rooms. I wanna thank everyone who made this a great year for the QTA, most of all my editors, and everyeone else who contributed news, rumors, pictures and funding. Thanks to everyone who used our Amazon links, our lifeline, and thanks to all the Ps, PRs, QTs, Lodes, Lilis and all other great people out there. From the bottom of my heart, all the best! Happy New Year!!!! *insert fireworks here*