These days we rely too heavily on papparazzi agencies like Belga.be for pictures from Inglourious Basterds, but I guess the paps are good for something then. Here are the first pictures from the actual Berlin/Potsdam set (the film has been shooting in surrounding areas for weeks now), showing Til Schweiger, Diane Krueger, , Ludger Pistor, Ken Duken (no idea who he is), August Diel and others in full costume (and with cell phones; one soldiers looks like he might get a bullet through his head). Here are some small pictures, click here to get to belga.be (do a search for “tarantino”) to see the full thing: 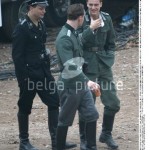