If you’re an absolute Tarantino fan and/or cineast, you may have already listened to the whole three hours of the special July episode of the Pure Cinema Podcast. Not only is it a great idea to regularly watch this podcast, which among other things regularly delves into the New Beverly Cinema‘s program of that month, but it is a particularly great idea to watch this episode, because Quentin Tarantino himself comes on along with the show’s regulars Phil Blankenship (the NewBev’s social media guru) and Jules McLean (the NewBev’s ops director) to talk about the July 2019 calendar of his movie theater (which is by far one of the best places to visit in the entire Los Angeles area, and also one of the, if not the, coolest movie theater there is). 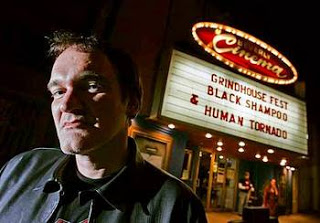 This episode is a perfect primer for Once Upon a Time in… Hollywood (along of course with Furious Cinema’s primer, their Entering new Hollywood article and the various info you can read on our social media channels and in The Archives). Click below to listen or here on Spotify, here on Stitcher, and here on LibSyn.

The show goes into the movies programmed this month, their backstories, how they may have had an influence on Quentin’s upcoming movie or how they tie into the characters of Cliff and Booth, or the summer of 1969 in cinema terms. Whether it is Italian westerns, crime flicks or spy movies, or 60s New Hollywood classics, it’s all there and if you really want to understand Once Upon a Time in… Hollywood, or understand what went into it and what influenced Quentin, this is a must. We’re not even kidding around. This isn’t a “yea if you’re interested, listen to it” kind of recommendation, this is a sit-your-ass-down-and-soak-it-up command, and you better have paper ready and take notes, too.