I recently had the pleasure of rewatching Django Unchained on a (relatively) big screen, this time outdoors, only a stone throw away from where Quentin Tarantino walked the red carpet about six months ago when he premiered the movie in Berlin. The best part (even though I am not so much a hard-line celluloid person) was, that they screened it QT style: “real reels”. And there was an intermission. I love intermissions as much as I love long movies. Django Unchained has had a phenomenal run (aside from China), and now even my dad has seen it. It took a bunch of awards (over 18), did great at the box office and is still gaining fans around the world. In Germany in fact (just as an example) it went on to be the most successful Tarantino movie ever, even though Inglourious Basterds was – considering the subject matter – a lot closer to theater goers’ interests, and “African American culture” is not  something the average German moviegoer connects to, so all the more surprising. But, Europeans do love Westerns, and entertaining ones all the better. There used to be a time (in the good old days, and I researched this), when the real blockbusters were entirely different movies than all the superheroes and CGI robots and all that stuff today. Back in the late 60s for example, Sergio Leone‘s Once Upon a Time in the West held on the top spot for weeks, earning millions (in France it played over a year), unimaginable today. I digress… so all the more exciting to see a western being so popular. The awards season is not over yet though, and Quentin is up for at least two more honors, and recently added one more to the shelf.

Quentin Tarantino to be awarded the 5th Lumiere Award

Just recently it was announced , that Quentin will be awarded the 5th Lumiere Award (named after the French brothers that pioneered filmmaking) at France’s 2013 Lumiere-Grand Lyon Festival. Django Unchained made over 38 million at the French box office, and according to the release, his love and advocacy for cinema are the main reason for the honor, as the festival head explains, the award is handed to him

“for his entire film career, for his radiant passion for the cinema, for the tributes paid even within his films to the whole mythology of cinema (filmmakers, actresses, actors, musicians, etc…), and for the way he often exclaims, ‘Vive Le Cinema!’” (read more)

Most of you will remember the nod to French cinema also in Inglorious Basterds, as Shoshanna puts up the director’s name on the bill board which, at the time, wasn’t the norm. But as the goes to explaining, in France, they love directors. The award is slated to change hands in front of a 3.000 audience on October 18 in Lyon. Click here to read more about the award lineup that includes screenings of retrospectives. Among the other award winners will be Hal Ashby, Ingmar Bergman and Henri Verneuil. You’re keeping some great company, Quentin! :)

Django Unchained up for Humanitas Prize

Giving credit where credit is due, according to Humanitas president Ali LeRoi, the award honors film and television work  “that explores the human experience in an entertaining and delightful way”. For this year’s 39th instalment, Quentin Tarantino’s Django Unchained is pitted against David O’Russel’s Silver Linings Playbook and John Gatins’ Flight in the feature film category. The prize will be awarded on September 20th. Another Weinstein release, Fruitvale Station, is nominated in the Sundance category. The unusual drama has won the Sundance top prize.

A the Saturn Awards (kind of like the Oscars, but for the “sci-fi/horror/fantasy genre”)  this year on June 26, the lineup was quite impressive. For the 39th time the Saturn awards were handed out, and even though (me not being a big fan of comic book or superhero movies) The Avengers won quite big, Quentin took home the award for best writing. 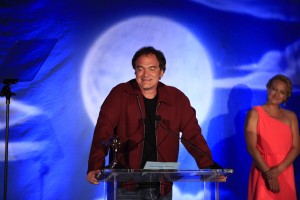 I took the “hattrick” basically from soccer, I don’t quite know where else it is used, I believe (I don’t even watch soccer), it’s when you score three goals in a row. Quentin scores more than that, he’s more like The Fastest Gun in the West that way. Jamie Foxx also took home the BET Award, and as always, if you scroll down our Facebook page, you’ll find all kinds of entertaining bits from and beyond the world of Quentin J. Tarantino.

That’s it for now, all that’s left is point you avid cinephiles in the direction of a few must-read articles of the nerdy kind: Let me point your attention to a Female Prisoner 701 review at The Deuce, an article on Fernando diLeo on Furious Cinema, as well as an amazing article on the the westerns of Robert Hossein at The Spaghetti Western Database. Thanks for reading.