Sons of bitches! Calvin Candie is pissed, because Django and Dr Schultz are playing him for a fool!? What does that have to do with Django being a silver-tongued devil, and why does Don Johnson‘s character think they won’t make the county line? It all comes together in this new, furious, international Django Unchained trailer. No, it is not more or less spoilerific than the previous ones, but if you have been following the developments and seen all the trailer footage, the basics of the movie will come together now for you.

A few weeks back an international trailer was about to come out, but then it really didn’t quite. So the previously released “trailer 2” and this one stand as the latest and most revealing advertising bits for Quentin Tarantino‘s upcoming masterpiece – a spaghetti western set in the American south. Today is also the 20th birthday of Reservoir Dogs. And while the day is not over, and we also found a new German poster for Django Unchained, who know what else is in store for Django fans? Mark your calendars, Django is off the chain! 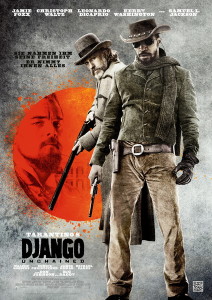 What is very interesting, is that with more and more trailers and pictures, more of the relationship between Django and the doctor is revealed. The student-teacher relationship is highly intriguing, also how Django’s real personality is rather shy, but he sort of becomes more and more furious as he learns and faces challenges. What should become apparent by now is how amazing the gunfights will be and how cool the costume and set design. This will be more than a period piece look, this is going to be a cinematic wonderland of epicness, with Tarantino sprinkles on top and a thick Richard Robertson icing. We wonder how much of the Morricone sound will carry over into the actual movie, this latest trailer features a remix version of Ecstasy of Gold, personally one of my all time favorite Ennio Morricone tunes.

PS: We will try to get a more high-resolution version of this poster, and we will update this post should any more related things break tonight. Please also follow us on Facebook and Twitter to stay tuned.

Update: We found a high resolution version of the Latinamerican Spanish version of this poster. Click here for our poster archive!