Mark your calendars, fellow cineastes. A little over a month before the theatrical release of Django Unchained, Studios Miramax and Lions Gate will unleash (or unchain) a full load of Tarantino epicness onto the BluRay world. “Tarantino XX” (that is Roman figures for 20) is the title of a 10-disc, 8-film Quentin Tarantino 20-years-of-filmmaking BluRay box that includes all his movies plus two exclusive extra features (see below). Do we have you attention -and curiosity? This is a great way to finally get the whole shebang on BluRay, in a great-looking box and with tons of exclusive extras.  Yes, we know, many of you were hoping for Kill Bill: The Whole Bloody Affair, but that will arrive sooner or later.., in the meantime, put your Tarantino socks on, and prepare to get blown away… 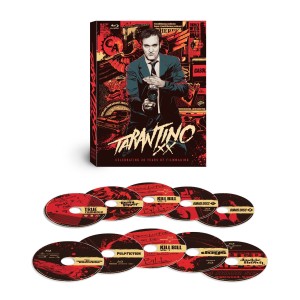 The cover was designed by MONDO artist Ken Taylor, and the exclusive extras are five hours of additional goodies many of them previously unavailable, among them are

The release date is November 20 (click here for the press release), and you should make sure you pre-order, you never know how low the number  of copies is they will actually produce. And you want to host a kick-ass Tarantino movie night with your friends of course. An all-night Tarantinogasm movie night (while you are at it, get From Dusk Till Dawn also)! Plus, this secures you Amazon’s pre-order price.

CLICK HERE TO PRE-ORDER AT AMAZON.COM (support us by using this link!)