We’re not sure where that came from, but Joblo.com just posted what seems to be the Spanish teaser poster for Quentin Tarantino‘s upcoming Django Unchained, which is currently filming in Louisiana and is slated for a Christmas release this December. With poster leaks the one clue that gives away its authenticity are the company logos, and in this case also the the URL www.djangodesencadenado.com which currently forwards to the Sony Pictures Spain website. That may also indicate that the Spanish title of the movie will be Django Desencadenado which means, you might’ve guessed it, Django Unchained. 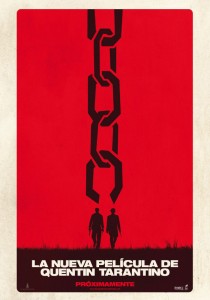 We recently learned of course – especially if you follow us on Twitter, Facebook or Google Plus – that Joseph Gordon-Levitt dropped out of the movie (Link), and we’ve also read a nice interview with Walton Goggins of Justified fame, talking about (Link on gq.com) his involvement in Django Unchained. He says, quote “He’s a savant auteur who is as passionate and as playful as any artist I’ve ever worked with. His enthusiasm is infectious, and the story is a movie that only Quentin Tarantino could make.”

All in all, it seems like the movie is well on track, however with very little information trickling out so far, the leaked set pictures aside. Of course some of you might have seen the fan art Federico Mancuso made (Link), in fact these are so cool we wouldn’t be surprised if they’d used  then officially. The Spanish poster in fact looks quite similar in style, makes me wonder if that’s in fact the case maybe. Update: We know that this teaser poster is not his original work, but apparently based on his style.

UPDATE: Now also the US teaser poster (which is identical) has appeared, along with the US teaser website www.unchainedmovie.com which as of yet has no content other than an animation of the teaser poster, and an URL to facebook.com/UnchainedMovie which as of yet is not getting us anywhere. We’ll keep you posted, and please send in any more infos if you find some across the web, from other countries for example. 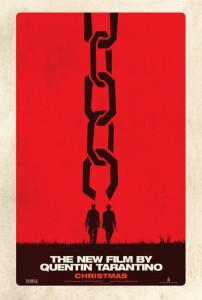 UPDATE 2: We also found the Italian and the Brazilian version, and we identified a few possible official website adresses. We’ve added the posters to our Django Unchained posters gallery, and the information we have to our Django Unchained information page. The Brazilian poster indicates that the movie’s official title there might be Django Livre.

Update 3 (April 14): We haven’t slept and added a few more posters to our poster gallery, and we also gathered a list of official websites of the movie worldwide. There’s also a link to the official international release dates page. We’re looking for help though. Please let us know if you know of a localized title for the movie, if you found a poster we haven’t listed yet or if you found an official website – or any other new information. Contact us!

Lastly, official synopses were published at the end of the week. We have added them, in those language we found to this page. Currently in English, German, French, Spanish and Brazilian Portuguese.

Set in the South two years before the Civil War, DJANGO UNCHAINED stars Academy Award®-winner Jamie Foxx as Django, a slave whose brutal history with his former owners lands him face-to-face with German-born bounty hunter Dr. King Schultz (Academy Award®-winner Christoph Waltz). Schultz is on the trail of the murderous Brittle brothers, and only Django can lead him to his bounty. The unorthodox Schultz acquires Django with a promise to free him upon the capture of the Brittles – dead or alive.

Success leads Schultz to free Django, though the two men choose not to go their separate ways. Instead, Schultz seeks out the South’s most wanted criminals with Django by his side. Honing vital hunting skills, Django remains focused on one goal: finding and rescuing Broomhilda (Kerry Washington), the wife he lost to the slave trade long ago.

Django and Schultz’s search ultimately leads them to Calvin Candie (Academy Award®-nominee Leonardo DiCaprio), the proprietor of “Candyland,” an infamous plantation where slaves are groomed by trainer Ace Woody (Kurt Russell) to battle each other for sport. Exploring the compound under false pretenses, Django and Schultz arouse the suspicion of Stephen (Academy Award®-nominee Samuel L. Jackson), Candie’s trusted house slave. Their moves are marked, and a treacherous organization closes in on them. If Django and Schultz are to escape with Broomhilda, they must choose between independence and solidarity, between sacrifice and survival…

Written and directed by Academy Award®-winner Quentin Tarantino, DJANGO UNCHAINED is produced by Stacey Sher, Pilar Savone and Reginald Hudlin. The executive producers are Harvey and Bob Weinstein, Michael Shamberg, Shannon McIntosh, and James Skotchdopole. DJANGO UNCHAINED will be released in the U.S. on December 25, 2012, and internationally by Sony Pictures Releasing International.