This came completely out of nowhere. The fan world has been waiting years for this announcement, and it comes in the form of an updated calendar at the New Beverly Cinema’s website. The LA movie theater, which is most likely one of the best movie theaters in the world, is a regular geek fest, and the must-go-to location for any serious cineast. Back in 2007, as AICN reminds us, Quentin Tarantino brought an avalanche of exploitation cinema to the NewBev, and screened one grindhouse movie after the other, with a big premiere of Grindhouse itself. Well, I guess it is time to exploitation-suit-up again, as the NewBev has one hell of a line up for this March and April, including exploitation classics that have never seen the laser of a DVD, such as Summertime Killer and Dark of the Sun. On March 27 and on following days, Kill Bill: The Whole Bloody Affair will be screened. Aside from the infamous Cannes screening many years back (read the report here, which also lists some of the common differences and explains the backstory of this version) this is the first time a larger audience will see this integral version of Kill Bill. Gone is the cliff hanger after what used to be Volume 1, and some additional anime footage has since been added. To make this clear: This is the actual integral, combined, unrated version of Kill Bill, not an earlier iteration of it that some people have already seen. I am not sure if some of the House of Blue Leaves scenes will remain black and white (as I personally prefer them and as it was in the script) or if they will now all be in full color (like in the Japanese version of Volume 1). The NewBev lists the epic at 247 minutes now, and I can only imagine the epicness of this experience. I envy all those who will be able to get tickets for this, which is like christmas, birthday and Elvis’ birthday all rolled into one, or something. With all i’s crossed and t’s dotted. If you’re able to make it, you should monitor their website closely so you can obtain a rare ticket. Many of the screenings, not just the Kill Bill one, will probably be attended by special guests. I could imagine that for example for the Rod Taylor night, but I am merely speculating. So there we go fellers, you may now have your heart attacks. Thanks to AICN for the heads up on the screenings. 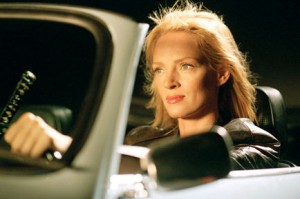