UPDATE: Amazon.com has the BluRay listed, click here (they also have the Japanese DVD). A DVD release is not yet announced. Click here to enter our Grindhouse BluRay page. This page has all the special features listed as well. The official cover is released as well.

I love you, Slashfilm. They just ran a story on what might cause joy and excitement in the fan community. Edgar Wright, director of the fake trailer “Don’t” which was featured in Robert Rodriguez and Quentin Tarantino’s GRINDHOUSE, sent out a tweet today that might be the most conclusive evidence for a planned home video release of the double feature yet.

So, get this, tomorrow I am doing a commentary on ‘Don’t’. Some of you will know what that means is finally happening.

A less-than-140-characters-way of saying Grindhouse is eventually coming to your home cinema soon? We think so. Robert Rodriguez is seeing two of his projects hitting the big screen this year, Predators (a reboot of the franchise based on an original treatment of his, but directed by Nimrod Antal) and Machete, itself one of the fake trailers from Grindhouse, but now developed into a feature film. It might well be that to use synergy effects, Weinsteins want to finally release it. To refresh your memory, Japan is the only country we are aware of that saw an official release of Death Proof and Planet Terror in their Grindhouse theatrical release form on DVD. A similar release in Germany was canceled. We’ll keep you posted of course. Don’t forget to join us on Facebook.

Update: Here’s the official cover, it probably comes in the dark sleeve you see on our Grindhouse BluRay page 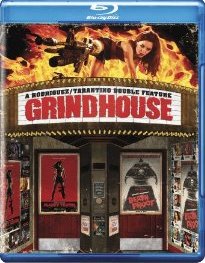