Closer look at a Basterd and Reverend 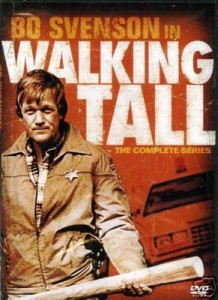 It came as no surprise to us, that none other than Bo Svenson had a cameo appearance in Quentin Tarantino’s Inglourious Basterds. Not only was Bo Svenson the star of Enzo Castellari‘s Inglorious Bastards, he’s also a living legend and has had a cameo appearance in Kill Bill as Reverend Harmony. We talked to Bo a few years back (read our interview here) and over the years I from time to time tried to get some information from him regarding Quentin’s project, of which there was none. But then, let’s just call this Quentin’s ace up his sleeve, because not only was this a very cool idea for a cameo, it was also almost a must. Bo Svenson in Inglourious Basterds was great, and there’s more of him on the special edition DVD or the BluRay. And now let me just do a short movie trivia on why I think his cameo was particularly awesome: Bo Svenson was in the original Inglorious Bastards, which Tarantino is a fan of (and really who isn’t). Bo Svenson also starred in the Walking Tall TV show. Both Tarantino’s Inglourious Basterds and Walking Tall feature characters with a baseball bat (really the Walking Tall signature prop, see the DVD cover to the right) or 2×4. Bo Svenson is sort of like the connecting element between Castellari’s and Tarantino’s visions of the Macaroni Combat movie, spiced up with a touch of Walking Tall, personified by Eli Roth‘s Bear Jew character. Even better that Enzo Castellari also has a short cameo appearance in the film. Tarantino’s the man, I would’ve done exactly the same thing, and in a way don’t we all play “X degrees of separation” movie trivia games all the time? Oh yeah, and he played the reverend in Kill Bill, awesome. And here’s Bo Svenson, guest-starring in Stolz der Nation: