Oh I was waitin for this one. Sgt. Stiglitz (played by Til Schweiger) may be one of the craziest motherfuckers the Basterds take up into their ranks, and he sure is one inglourious Basterd. Thanks to Slashfilm, one of my favorite movie blogs, here’s the first look at the TIL SCHWEIGER IS A BASTERD character poster from Inglourious Basterds, which – for those attending – will be shown at the Cannes Film Festival May 20th (8.30am, noon and 7pm) and May 21st (noon) for the first time in front of a public audience. My prediction is a standing ovation. By the way they also show other cool shit, make sure you study the Festival Guide if you’re there so you don’t miss out on seeing for example Duck, You Sucker! on the big screen. So here’s the poster: 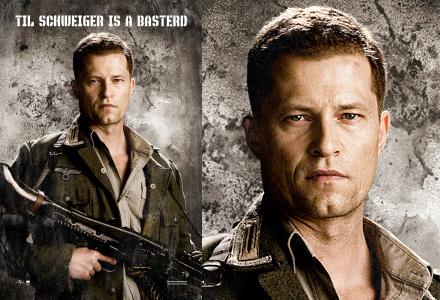