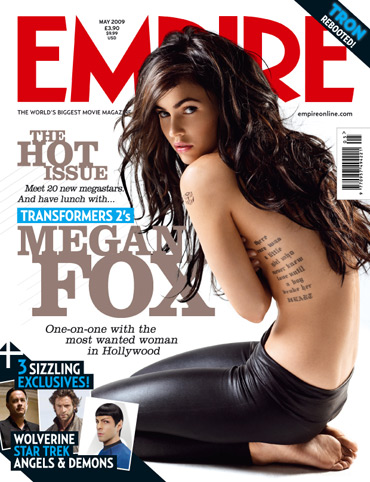 Empire magazine in their current issue are giving readers a rundown of hot new talents to watch out for in 2009, and of course there are some Basterds among them. First up, Mélanie Laurent, the real star of Inglourious Basterds. Empire writes

“It’s typical of Tarantino to defy nethead demands and cast a relative unknown in the key role of the Nazi-slaying cinema owner Shosanna Dreyfus in Inglorious Basterds. Laurent has form in France: she won a César for Don’t Worry, I’m Fine, and was impressive alongside Juliettte Binoche in Paris, though we bet QT spotted her lead in grim Silence Of The Lambs-alike Room Of Death. She’ll provide an emotional centre to the scalp-taking carnage, and QT’s patronage will push her over the top in the States, where they’ll go doolally for her combo of fragility, innocence and inner strength.”

Next up, Michael Fassbender, playing a very Tarantinoesque character (a film geek) in Basterds, and also the character closest to that of Mike Myers. Empire writes “…Inglourious Basterds sees the German-born Irish-raised actor play a British Officer for Mr. Quentin Tarantino. Expect him to kill.” And last but not least they have Mary Elizabeth Winstead, everyone’s favorite new cheerleader from Death Proof: “Tarantino’s eye for can-do women picked her out for Death Proof, and now she’s Michael Cera’s objet désir in Edgar Wright’s Scott Pilgrim. Has grace, does comedy: got legs.“