Tarantino shoots some Basterds in Paris

For only two days, Quentin Tarantino will shoot scenes for Inglourious Basterds in Paris, even though most, if i not all, of the movie takes place in France. Seen below is a picture published in Le Figaro, one of France’s biggest newspapers. On a sidenote, some tabloids have mentioned Brad Pitt has already wrapped his scenes for the film, which will probably be shooting until the end of January. 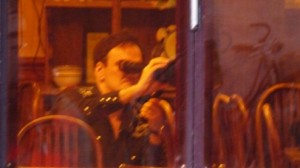 Update: Our friends at Filmgeek.fr have scored three really great pictures from the Paris set, that you need to check out, as well as a video that shows Quentin Tarantino, Daniel Bruehl, Melanie Laurent and others. Click here to view it.

Update 3: Belga.be has some pictures of The Man talking with Lawrence Bender and Harvey Weinstein, you can also see Daniel Bruehl in the pictures.