It was only a matter of time, was it. You thought December started somewhat slow in the Inglourious Basterds news department? I thought so, too. But thanks to filmz.ru (thanks to equilibrium blog for the heads up, kudos to the Cinefacts forums), we can see two pictures from the film in full glory, one showing Brad Pitt as Aldo Raine (check out his character profile) adressing soldiers (we also get to see his infamous scar for the first time), the other shows the already legendary bar scene including Diane Kruger in a fancy hat, even though hardly anyone knows anything about it, but a drinking game is very likely the occasion there. Click the thumbnails below! 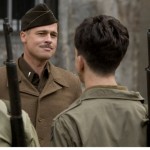 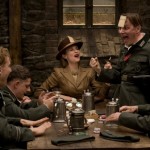