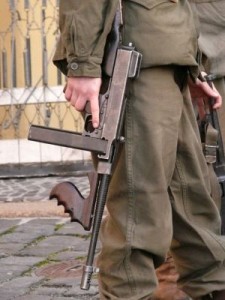 Extras in full battle gear running down a street, Daniel Bruehl as a sniper on a building top. A massacre in the making? Click here for a whole series of pictures from the set in Goerlitz, Germany. Thanks to Pia for the heads up. There’s still considerable speculation even among those who’ve read the script as to what exactly these pictures show. All signs point toward the movie-within-the-movie (or a ‘Wochenschau’ bit) that establishes Zoller’s sniper / war hero credentials. Inglourious Basterds will probably be the first Tarantino movie with lots of gunfights. We’ve had Jules and Vince emptying a gun on a guy, Robert DeNiro shooting Bridget Fonda in the belly, Mr Pink pinning down a few cops, but all in all, his movies have been remarkably peaceful. No more. From the looks of all this, there’ll be a high body count.