Til Schweiger is a real Bastard 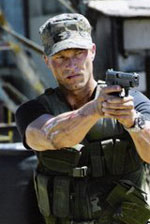 He’s in, he’s out, he’s in? THR reports (albeit with a story headline that makes zero sense) that Til Schweiger has been cast as one of the Inglorious Bastards (apparently they have Germans in their ranks, what will The Bear Jew think?). The word around the campfire during the last few weeks was that he might play Col. Landa, or the character Daniel Brühl finally got, or someone different, and that in the end he lost the casting competition. Apparently not. THR also reports that Diane Kruger is on board, beating Ms Kinski for the role. The reports don’t mention whether this is all confirmed. On a sidenote, here’s a cool quote from a news blog that also reports on this: Not all Germans are Nazis. Some of them are Bastards.