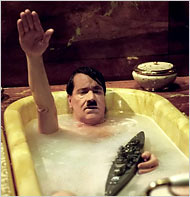 The film isn’t even in the can, it hasn’t even been cast yet, and already there’s a gazillion of websites quoting one (!!) German film critic, or one (!!) article in a respectable German newspaper about how Inglorious Bastards might (!) hurt some feelings among the German public over the film’s likely depiction – and elimination – of Nazis by the hands of Brad Pitt‘s all-Jewish commando unit. The latest bit is in Vulture, and it states, packed in a I have to admit rather stereotypical text, We’re no expert on the German national temperament, but when we watch movies about how Americans were assholes to, say, the Indians or slaves — to choose two somewhat analogous historical situations — we sort of shrug and say, “Well, we deserve that.” As most of you know I am myself German, and not entirely unfamiliar with this topic. I just wanted to say that I find it utterly hilarious that on the basis of a few blurbs, the internets are already going half-apeshit over what might be happening once IB will hit German theaters. I understand Vulture’s point, but seriously, the last few years have seen German movies about Hitler in many variations, no other country probably has churned out more history-digesting and disecting documentary television and I will just claim that German audiences are among the most Tarantino-loving in the world. So should, in a year from now, a few idiot film critics bitch about how Quentin Tarantino choses to depict semi-fictional on-screen Nazis, please…. let them, while the rest of us is having a great time at the movies. Let’s not give this more attention than it deserves. And to answer Vulture’s question, I personally think that Cruise’s Valkyrie will likely create more bitching because a) he’s a scientology goof and b) that story has already been made into a successful German TV movie that is on prime time television almost twice a year….